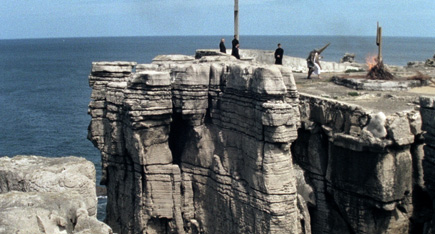 The theme for this year’s AV Festival, which runs in the Northeast throughout March, is ‘extraction’. Drawing upon its host region’s rich industrial history, the biennial festival of art, music and film concentrated its focus during Postcolonial Cinema Weekend (March 7-9) to showcase varying artistic approaches to colonialism and its lasting legacies.

Following its directors’ award-winning short A HISTORY OF MUTUAL RESPECT (2010), mid-lengther PALACES OF PITY (PALÁCIOS DE PENA) continues Gabriel Abrantes and Daniel Schmidt’s preference for the distinctively ironic. As with their earlier work, the directors operate by means of cultural – and specifically cinematic – appropriation, in order to ruffle feathers, telling the tale of two spoilt cousins in present-day Lisbon who party their seventh grade away on the eve of their grandmother’s death. 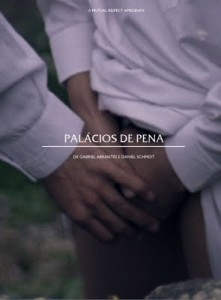 Just before she dies, the old woman recounts – in fantastical and eroticised flashback – a story to the two girls, in which two gay Moorish priests are tried and executed by knights who nevertheless admire the lovers. Upon waking up, the girls discover their grandmother has died. Following an intergenerational lesbian encounter with her notary, one of the girls is able to seize full inheritance of her grandmother’s will at the expense of her cousin. Absolute wealth corrupts absolutely.

Opening on a gorgeously and gradually illuminated football stadium, PALACES OF PITY unfolds against a series of breathtaking locations. Following the first scene, the two young protagonists visit a dam  and are dwarfed by it entirely as they take their grandmother’s goats to graze, while the flashback scene takes place in an actual Moorish Castle dating back to 700 AD. Natxo Checa and Eberhard Schedl’s cinematography belies the film’s apparently slim budget, while Abrantes and Schmidt demonstrate much tact in disguising their lack of resources, largely through well-timed cut-aways and well-chosen remote settings.

Strong images, however, can only go so far. PALACES has a forced surrealism to it, employing a kind of Lynchian, associational incongruity rather than concrete historical storytelling. No bad thing, perhaps, but the persistent artificiality rapidly wears thin. The deliberately wooden acting; the belaboured longueurs between lines of dialogue; the sudden dissolve from images of adolescent girls in high heels to a slow-motion sequence cut to a distorted adagio version of Alphaville’s “Forever Young”…  Such reappropriation and exaggeration of mainstream conventions has in the past been a legitimate political practice, but caught so knowingly between the appreciable (and insufferable) strains of INLAND EMPIRE and the jejune kitsch of SPRING BREAKERS, Abrantes and Schmidt seem to be sniggering at the thought of upsetting the status quo rather than making a wholehearted commitment to doing so.

To suggest systematised political oppression stems primarily from psychological shortcomings – that is, from the oppressors’ feelings of horror towards their own ‘forbidden desires’ – is surely a limited (if not entirely refutable) outlook. Sadly, then, while the political agency of surrealism stems from its legitimate emphasis upon those basic human desires that in class society are suppressed and driven underground (or within), the provocateurs seem on this occasion to be late to the party. Michael Pattison

AV FESTIVAL RUNS THROUGHOUT THE NORTHEAST OF ENGLAND DURING MARCH 2014