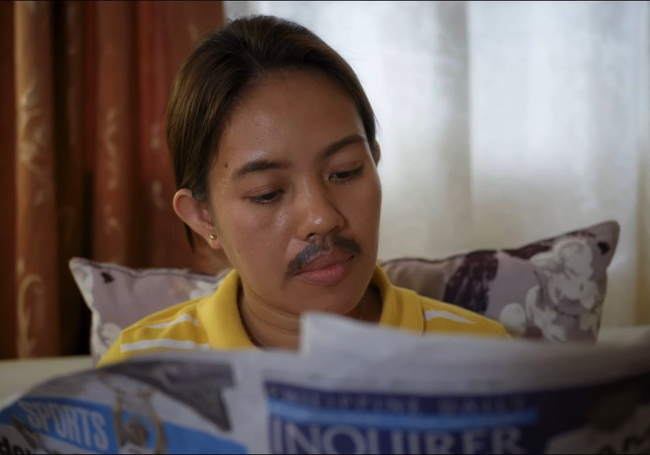 It you are bored with the daily grind of working from home in these tedious Covid times then spare a thought for Filipino domestic workers in the Far and Middle East. In this startling expose of modern slavery that brings us up to speed on the acceptable ways of serving lunch to a Singaporean lady, or cleaning a lavatory in a Dubai household, there are some shocking revelations, tears and sadness for these young women who are often 0ver-worked and badly treated by their employers. But their training instructors urge them: “Never cry in front of your boss, it’s a sign of weakness and Filipinos are not weak”.

Overseas is the sophomore documentary of South Korea’s Yoon Sung-a, and makes for compelling viewing although it often lingers too long on each repetitive scene. There has been a long tradition of employing Filipino workers and these women are often treated as members of the family throughout Europe. But Yoon concentrates on those destined for the Middle and Far East where the working conditions are considerably more harsh, and employment laws less kind. Clearly the financial incentives to work abroad are worthwhile and makes sense, despite the hardships. Working mothers in the Far East are fully accustomed to leaving their kids with members of their own family while they pursue the financial incentives available overseas in order to provide a home of their own when they finally return retire.

Some of the workers are lucky, but many are made to work long hours in poor conditions: one girl talks of sleeping on the kitchen floor and being woken at 5am to start her day; another was constantly given orders even while eating her meals. There is also talk of sexual abuse in a household in the Middle East.

Overseas resonates with Davide Maldi’s recent feature The Apprentice that examines the service industry in Italy and the ongoing attitudes of those employed in the sector, while Lila Aviles has explored the life of a hotel worker in Mexico City in her darkly amusing, award-winning film The Chambermaid (2018). Throughout the Europe domestic workers are more in demand than ever with middle class families paying to having help at home – both parents are often out working and their adult (working) offspring are still in residence. In the Far and Middle East the class system is more rigidly in place but times are changing and these domestic workers are justifiably become more dissatisfied with their lot. These girls are caught in the crosswinds of change.

Yoon adopts a quietly observational approach to demonstrate how the collective experience of these women is broadly negative – yet is at pains to show that they are individuals rather than just a collective mass known for their placid and obedient nature. MT