In his lavishly filmed documentary Nick Hamer meets a group of Trappist monks in the Leicestershire monastery of Mount Saint Bernard Abbey. He talks to them individually about their lives, thoughts and prayers. The Cistercian Abbey is a closed community that has seen its numbers dwindle since the early decades of the 2oth century. Now there are only 30 monks in residence.

Although the film subverts our expectations about spirituality, the main focus is the monks’ desire keep their community thriving and viable. And to this end they have converted their dairy farm into a brewery, a traditional monastic occupation which has been successful enough to ensure the abbey’s survival. Their beer is called Tynt Meadow, and is sold as ‘English Trappist Ale’, Helped by Belgian brewing advisor Constant Kleinemans it has become a successful craft beer. 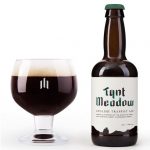 The inspirational tenet of the Cistercian monks is simplicity. Life in a monastery is not an escape route from the world. Apart from running the monastery and brewing, the monks lives are spent in deep contemplation, silencing their minds and stripping back their own desires and thoughts and offer themselves to God in prayer. Not to be confused with meditation that has as its focus green fields, beaches or or the next holiday: the monks are taught to empty their minds so as to make room for God’s presence. Their existence is enriched by the simplicity of their lives and not their material wealth.

Death is not a sad end but a joyful culmination of their existence, and everything they have learnt and given to others through prayer. Two monks actually die during filming and their passing is a peaceful and contented occasion. By the end of Hamer’s film we have learnt that the monastic life is not about suffering or deprivation but a journey towards fulfilment and acceptance of themselves and their selfless commitment towards the world as a whole. And Hamer conveys this convincingly in this spare and dignified documentary. Being a monk is about achieving the highest form of life. MT