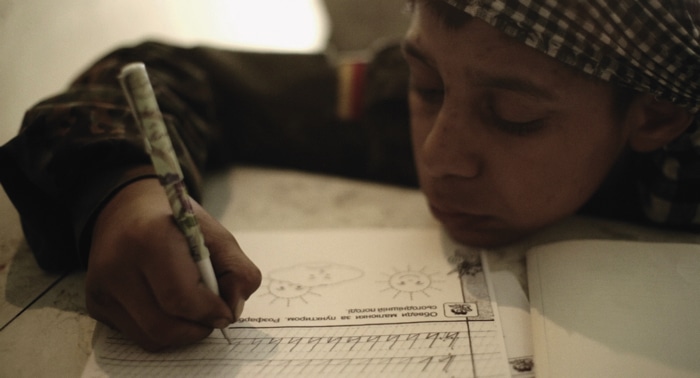 Ukraine. A field of sunshine yellow. A boy runs laughing through the blossoms. Then back to reality. “We will defend Ukraine our homeland”. The Maidan uprising and molotov cocktails fly and vehicles blaze in the black smoke. The clamour is constant and 13-year old Roma is in the thick of it, a street sign serves as his shield against the encroaching onslaught. Then darkness.

Olha Zhurba’s feature debut follows Roma a street boy neglected by state and family who became a post boy for the Ukrainian revolution back in 2014. Seven years later he would be released from his orphanage into the adult world with nothing but a knife and a lighter. Virtually illiterate he drifts in and out of prison for petty crime to make ends meet. Bright-eyed, dark-haired and able-bodied Roma then shuttles from pillar to post looking for a ‘social dormitory’, somewhere to sleep. At last he gets his head down in a squalid bungalow with a friend (or maybe a brother) Kolia, in Yahotyn, on the outskirts of Kyiv where the police are constantly monitoring his movements on video surveillance cameras. But there are happier moments in the soft summer countryside when he meets a girl and sort of falls in love. But how can you love when your mother left you. And most of his time is spent looking for his mother, or at least her grave. Meanwhile police presence is like a silent doom bird, voyeuristic video surveillance tracking his movements on a 24-hour basis.

Zhurba makes use of a range of techniques to flesh out Roma’s backstory with flashbacks and a black screen accompanying his VoiceOver conversations back at the orphanage. Along with Volodymyr Usyk’s roving camera footage, Zhurba pieces together an impressionistic but ultimately tragic fractured narrative of survival for a opportunistic drifter who once had hopes of “getting an education and moving to America” but now rejects offers of work, scraping by as a bottom-feeder with nothing left to lose. MT