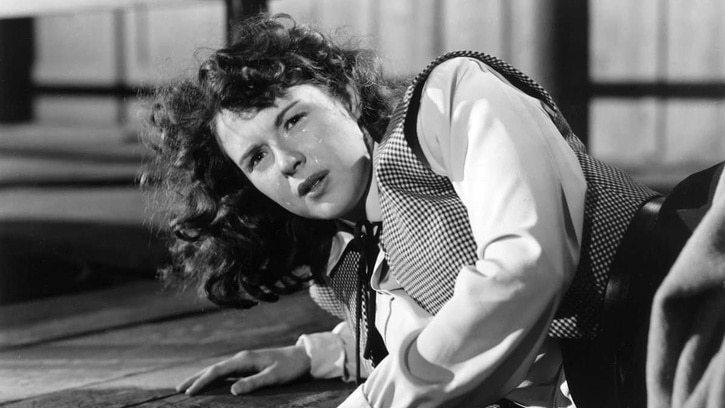 Behind the sensationalistic title lies an earnest social drama of the sort one would already expect of director Ida Lupino. It follows a similar plot arc to the same year’s On Dangerous Ground, in which a human being damaged by the Big Bad City finds peace of a sort out in the country. (Although was it really possible in 1950 for a stranger to walk straight into a job – especially one involving handling money – without any sort of references or proof of identity?).

The assault on Mala Powers is never described more explicitly than as a “vicious criminal attack”, and it COULD simply have been a violent mugging – which would have been bad enough; but the morbid obsession with her on the part of her attacker makes it clear what the full nature of the assault was.

A religious component in the script – caring hunk Tod Andrews who provides Powers with a strong shoulder to lean on is revealed to be a clergyman – is one of many potentially provocative issues left unexplored; and there are various other loose ends. Her attacker is revealed to be not just an average guy who turned nasty, but a messed-up serial offender who progresses from sexual assault to armed robbery. The would-be suitor whose brusque advances prove she’s still not safe from such unwanted attentions even in the Garden of Eden she seems to have found is introduced very abruptly – and despatched even more abruptly with a blow from a monkey wrench. The ending is emotional but highly equivocal; although we have been explicitly told that it will probably take years of therapy and guidance to grant her eventual peace of mind.@RichardChatten