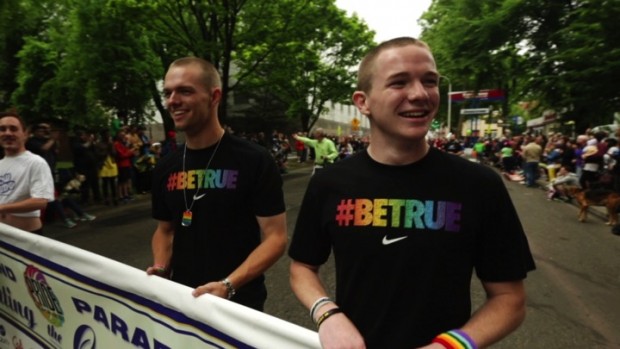 With: Billie Jean King, Martina Navratilova and others

OUT TO WIN is a full on in ‘your face’  affair that focuses on LGBTQA World class athletes as they share their ‘coming out’ stories to the camera. There’s nothing new here revelation-wise, for most of us, but the combined force of these heartfelt stories serves as a full scale slap in the face of the anti-sentiment that traditionally spread through the heartlands of America’s sporting life. Sporting communities are not as enlightened or as accepting as the creative arenas of film, theatre and the Arts, and most are reinforced by diehard traditionalists and often dominated by a macho male following, who are, by definition gay-phobic – particularly when it comes to the locker-rooms.

One after the other, talking heads of famous Athletes pop-up ‘close and personal’, to share their emotions and often their tears about being gay in the world of Sport: Wade Davies, Martina Navratilova, Billie Jean King, Brittney Griner, David Kopay, Jason Collins, Charline Labonté, Conner Mertens, and John Amaechi to name but a few. It emerges, not surprisingly, that many were scared to reveal their true sexuality for fear of losing valuable sponsorship or community support.

Without doubt, it’s a crying shame that these talented individuals have had to suffer in the name of sexuality. Filmmaker Malcolm Ingram is known for his documentary award-winning doc: Small Town Gay Bar. Here he has assembled an impressive array of news stories and archive footage to serve his hard-hitting story that doesn’t even give lip service to creativity in its camerawork or style. Often, the film is edited to repeat soundbites, like an advertisement, blaring out and reinforcing his message, over and over again so it feels like a list of examples instead of a cogent narrative. Rather than appealing to our hearts and minds, we feel pistol-whipped into commiserating with these confessions, worthy though they undoubtedly are, in telling a story of pain and gradual acceptance has come about due to the trailblazing efforts of the early lesbian and gay sporting pioneers.  MT