Stellan Skarsgard has retired to the Norwegian woods after the death of his wife, when the past comes back to visit him in Hans Petter Moland’s overwrought but enjoyable coming of age drama that revolves around a circle of guilt.

Nature and breathtaking-taking landscapes dominate a tale that opens in the small cosy cabin where Trond spends his days reflecting on the past and the fragility of memory and loss. Leavened with gentle humour this complex and evocative story sashays back and forth from the 1940s until 1999, adapted from a novel by renowned Norwegian writer Per Pettersen.

Trond’s rural idyll soon ends when he comes across his neighbour Lars (Bjorn Floberg), and he  recognises him from his youth. In flashback the teenage Trond (Jon Ranes) is spending the summer with his timber merchant father (Tobias Santelmann) in another remote part of the woods. Trond also strikes up a friendship with a troubled boy called Jon (Sjur Vatne Brean) who feels responsible for the death of his young brother, killed in a freak accident the previous day. His adolescent curiosity provides the subtext for a sexual awakening that permeates this visually stunning film. And this comes to a head when he meets Jon’s mother (Danica Curcic) at the family funeral, and later at a local event. But his fantasies are interrupted when he discovers, to his chagrin, that his father is having a full blown affair with Jon’s mother, and has been since the two were in the resistance movement together. Another tragedy then takes place during a logging session on the river. Moving the freshly cut timber downstream to be sold in Sweden, Jon’s father is badly injured. From thereon the two men’s animosity towards each other seethes in a drama more interested in atmosphere and surroundings than in creating a dramatic and suspenseful storyline. 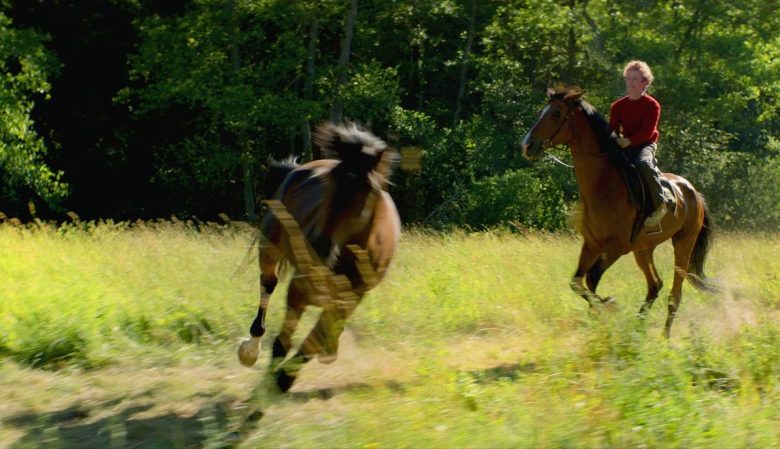 Trond is the only character whose arc feels developed and convincing. And Skarsgard and Ranes really flesh out his character in a meaningful way, both bringing a brooding  intensity to this thoughtful but troubled man. The scenes they inhabit are meaningful, the rest if just pretty pictures for over two hours. MT