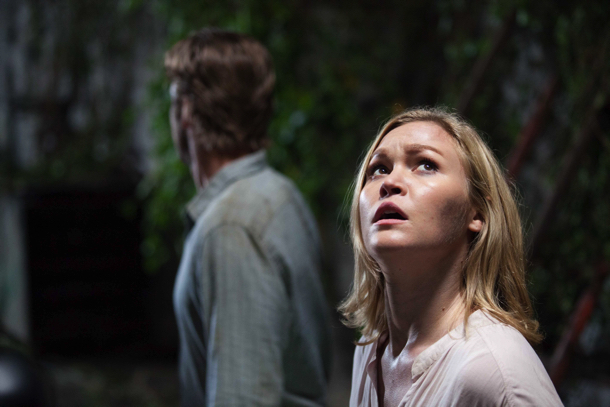 Why would any sensible family facing a move to South America choose a creepy old colonial ex-hospital as their new home? Well this is the premise of Lluis Quilez’ feature film debut OUT OF THE DARK. The Spanish love this kind of thing but we’ve seen it all before in Amenabar’s The Others and The Orphanage, both more enjoyable than this blend of supernatural horror, now out on DVD.

Exotic ambient birdsong and colourful fruit and vegetable markets provide a vibrant backcloth to their new life in Santa Clara, but soon a chilly wind blows through their idyll when Hannah starts seeing ghosts of masked children in the nearby woods. This could herald the start of the local ‘Festival of the Saint’s Children’, a jolly tribute to the mass burning alive of the village’s children by the conquistadors 500 years previously.

All the usual horror genre tropes are wheeled in at this point: lightening, bouncing balls, strange throaty whispers, creaky floorboards not to mention trite dialogue (“Ok sweetie, I think we’re both tired, we need to get some rest”) requiring the creative efforts of not one but three screenwriters who manage to interweave corporate skulduggery into the paper thin script. Hannah’s life comes under constant threat from unusual viruses until she is spirited away in the jungle by feral kids.

Meanwhile Stiles and Speedman have no sexual chemistry whatsoever and an underwritten Stephen Rea talks to his daughter as if he was her travel agent with a sketchy but clearly suspect agenda. That said, there are some atmospheric visuals, lush locations and a gratifyingly short running time of 92 minutes. The only mysterious thing about OUT OF THE DARK is why it came to be made? MT