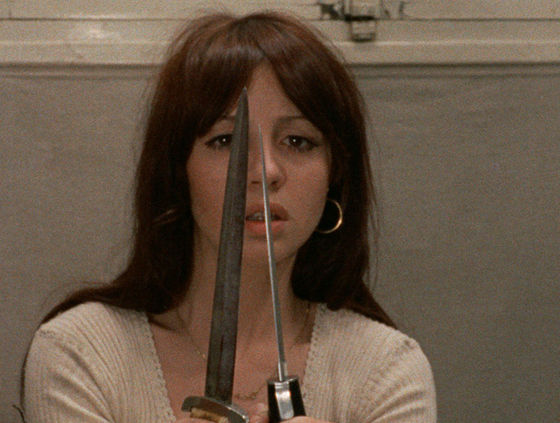 Known as the ‘holy grail’ of films largely due to its unavailability to the public after a one-off showing, Jacques Rivette’s OUT 1 shot in six weeks between April and June 1970 in Paris and with a running time of 773 minutes, premiered as a-work-in-progress screening in Le Havre on 10 October the following year. It then more or less disappeared until recently. There were just a few screenings of the long version: 1974 Rivette had edited a short version of a mere four hours at film festivals in Rotterdam and Berlin, but in December 2015 a new copy was shown in the USA. And whilst the secondary literature about OUT 1 grew to an extent that it could compete with the film marathon; very few people actually have seen the epic with its themes of conspiracy, paranoia, mystery, suspicion, absurdity and changing and doubling identities.

This is cinema shot during a journey of rediscovering film as an art form of improvisation. The title is programmatic: Out (as the opposite to the popular ‘in’), One (as the first film of many), and ‘Noli me tangere’ (Don’t touch me) scribbled on one of the original film canisters. Split into eight episodes between 80 and 100 minutes, OUT 1 was supposed to be shown on TV, but ORTF decided against this and considering that Aeschylus and Balzac are the main pillars of the ‘narrative’, it might have been the right decision. Trying to write a synopsis, how ever exhaustive, does OUT 1 no justice – this is cinema one has to ‘live’ with. During the screening in Le Havre, the audience talked about the protagonists as if they were personal friends, and many in the audience felt bereft at the end of the performance, the characters had become a part of their life. OUT 1 was a metaphor for the fallout and failings of ‘May 1968′ when the movement split into competing groups. In this way, OUT1 is a critique of Rivette’s debut film PARIS NOUS APPARTIENT (1961), sharing the conspiracy theme with OUT 1.

OUT 1 was Rivette’s fourth feature and it was a break with everything he had done before. Having grown tired of writing scripts, the idea was to direct a film that evolved in a realistic way, like everyday life. Rivette commented “a week before shooting began, I was faced by the need to find some way of representing all this, and urgently – if we weren’t to waste the six weeks’ filming provided for by the budget – so we had to have a planned shooting schedule. I spent two days with Suzanne Schiffman. [co-director]. One afternoon she asked me about the characters and she filled up thirty or forty pages in a notebook. Then we looked at each other and said: what are we going to do with all this? We tried to take each character in turn, but nothing came of that, then suddenly I think it was she who had the great idea: we must draw up a bogus chronology – because after all a story does unfold in time – indicating an arbitrary number of weeks and days on the vertical lines, and the names of the characters going the other way. From that moment… it was very odd but this sort of grid influenced the film a lot. The great temptation was, not to fill in all the squares of course, [but] after that it became like a game, like a crossword. Actually it was done very quickly.”

Two theatre groups, led by Lili (Moretti) and Thomas (Lonsdale) are rehearsing different Aeschylus plays: “Seven against Thebes” and “Promotheus Bound”. Lili and Thomas had been a couple before, and their split is only the first of many. On the periphery of the theatre groups, Colin (Leaud) and Frederique (Berto) make a living as conmen, and even though the two are the main carriers of the narrative, they only meet once very briefly. Colin believes that there is a “Group of Thirteen”, men and women, who are a secret society, based on characters of three novellas by Balzac. Frederique steals letters from Etienne (Doniol-Valcroze), who is playing chess with himself, which prove that the members of “The Thirteen” are communicating.

Another main protagonist is Emilie (Ogier), who, under the name of Pauline, runs a meeting place for the group, whilst searching for her husband Igor, who has gone missing six months ago. Eric Rohmer has a great cameo as a Balzac expert, who helps with the very much needed plot exposition, since Colin receives messages with cryptic references not only to Balzac, but also Lewis Carroll’s “The Hunting of the Snark”. After Renaud (Libolt) joins the “Seven Against Thebes” production, first as an assistant, he takes creative control from Lili, who withdraws. After Renaud steals a million Francs from a racing bet, which was supposed to fund the production of the play, he disappears, the play is cancelled, and the members of the group hunt Renaud all over Paris. Frederique finally meets the man who Honey Moon is in love with: it turns out to be Renaud. In spite of them having a sort of “ritual wedding”, Frederique suspects that Renaud is part of another secret society, even more powerful and dangerous than “The Thirteen”. She warns him, but he shoots and kills her. Meanwhile, Lucie de Graffe (Fabian), a ruthless lawyer, has joined the group around Thomas, to discuss the lack of progress of finding any real clues to the existence of “The Thirteen”. Finally, Colin looses interest in the chase, and Thomas and his group retreat to Emiie’s seaside house in Odabe. Thomas, who had summed up the situation before, telling Lili’s friend Elaine “You don’t really know why you are a one of the ‘Thirteen’ and neither do I, but we are not supposed to admit that”, has a drunken episode at the beach and is left behind, whilst the last shot is of Marie, a member of the Thebes group, still searching for Renaud, in front of a statue of a golden Athena in Paris.

Rivette was proud he only wrote the messages which propel the plot. Apart from this, the actors were asked to define their characters, making the action personal and improvised. Pierre William Glenn’s images remind us very much of early Rene Clair films: Paris as a backdrop to some magical fable. Indeed, one can say that the city is used as a big theatre set for a cinema of illusions, where the bubbles burst, only to be replaced by new half-dreams. Saying that OUT 1 is magic and poetic realism, is not enough: it seems to glide into our sub-conscious, by evoking infantile fears and desires.
In trying to explain, why the audience forges such an uncommon attachment to the film and wants it never to end, Alain Menil points out, “that just as the secret society of the ‘Thirteen’ is organised around the secret of their inactivity, just as the theatre troupes of Lili and Thomas cohere around the absence of work, of a play to perform; the community of OUT 1 is formed around something that isn’t there: the experience of the film, the film as experience, takes place somewhere between the reality of the performers interacting in a specific time and place; and the phantasies of the characters that exists in the non-place and subjective time of the spectator’s imagination”.
In other words, a game of projection and transference takes place, like a brilliant innovative session with your psychoanalyst, striding along in a Paris of enigmatic beauty. AS