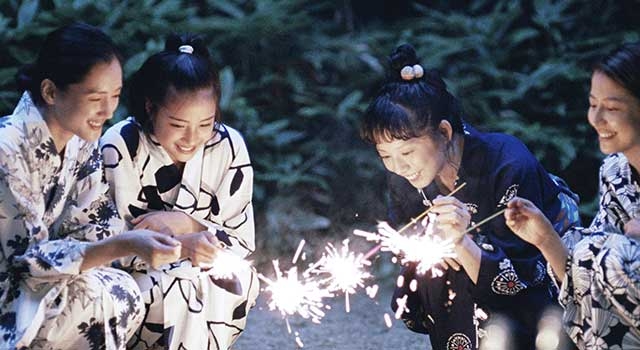 In his forth film, director Hirokazu Koreeda (Like Father, like Son), has changed his approach: so far he has tackled emotional issues head-on, Our little Sister is a melancholic, elegant and very intimate portrait of a family who bury conflicts behind a deceptively tranquil façade. Our Little Sister has echoes of Kon Ichikawa’s The Makioka Sisters and also happens to be set in Kamakura, a seaside town near Tokyo, were the great Yasujiro Ozu lived and is buried.

The slow-burning story follows three sisters in their twenties living in an sprawling old mansion: The eldest Sachi (Ayase) is a bossy nurse in the local hospital and dominates her younger siblings Yoshino (Nagasawa) and Chika (Kaho). Fifteen years go, the three were abandoned by their parents when their father left for another woman and their distraught mother also disappeared to start a new life. The stress of  bringing up her younger sisters has taken its toll on Sachi. Bank worker Yoshino has a string of unsuitable partners, and Chika is in love with her rather immature, eccentric boss, the owner of a sports equipment shop. Sachi is having an affair with a married lecturer whose wife is suffering from depression. But when their father dies suddenly, they are forced to acknowledge his long term carer who is also their teenage half-sister Suzu (Hirose). Sachi immediately takes to the girl but inviting her to live with them as a family, but in doing so further submerges her own needs as a woman and fails to address the natural grieving process of the existing trio who still harbour resentment for Suzu   “taking the father away from them”. Suzu herself expresses her guilt and also her feelings of being unwelcome in her new home. All these conflicts finally surface when their estranged mother turns up, wanting to sell the family home.

Less cinematically rigorous than Ozu, Koreeda’s patient approach – showing the conflict arising from the calm exterior of the characters and their traumatic wounds – Our Little Sister is very much in keeping with the master’s style of slow-burning tension. DOP Mikiya Takimoto’s pastel colours and gliding camera movements show nature as the primary healing force for human trauma evoking a wonderful portrait of deceptively peaceful life in the little seaside town. All the performances here are impressive but Ayase is the standout with her often forced Zen-like equanimity hiding a disturbing personality, with strong masochistic tendencies. Koreeda avoids fireworks, keeping the tone gentle and good-natured. Our little Sister is an insightful and moving story of four adult children forced to clear up the emotional legacy of their own terrible parenting. AS

ON GENERAL RELEASE FROM 15 April 2016 at CINEMAS NATIONWIDE