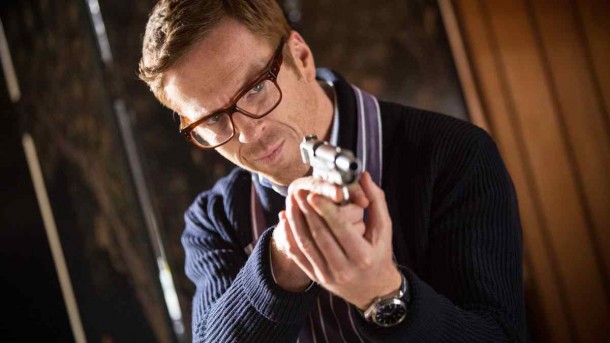 British director Susanna White cut her teeth at the BBC with Bleak House and Jane Eyre, before her big screen debut Nanny McPhee Returns. Here she turns her camera to the spy thriller genre with John Le Carré’s OUR KIND OF TRAITOR, superbly adapted from the original page by Hossein and featuring a fine British cast.

English couple Perry Makepeace (McGregor) and barrister Gail (Harris) are holidaying in a fancy hotel in Marrakech in a bid to repair their ailing marriage. Perry, a university poetry lecturer has slept with a student and Gail seems not to have forgiven him. They argue, and while Gail takes a conference call, Perry falls into conversation with Dima (Skarsgard), a Russian Mafioso who is afraid that his new boss ‘the prince’ (Dobrygin) is out to kill him and his family. Dima’s fear is reasonable, since we have seen the prince having his henchman execute another ‘treasurer’ and his family in Russia. The two men meet again the next day over a game of tennis, and Gail gets to know Dima’s wife Tamara (Saskia Reeves) and family. But soon it becomes clear that Dima has an ulterior motive, that of asking Perry’s help to negotiate his escape from the Russian mob, with the help of the British Government. In leverage, Dima is able to provide hard proof that a British MP (Jeremy Northam) is in cahoots with the Russians and abusing his influence to help them launder ill-gotten financial gains.

At Heathrow airport, Gail and Perry then meet MI6 handler Hector Meredith (Damien Lewis), who appears a little too keen to help, aided and abetted by spy sidekicks Khalid Abdalla (The Kite Runner) and Mark Gatiss (Sherlock). Soon Gail gets involved in helping to smuggle Dima, his wife and three children from Bern into Britain. On the run, they hide in a hut in the French Alps, where Dima’s daughter Natasha gives away their hideout inadvertently, phoning her lover on her mobile. Whilst the group survives the onslaught of the Prince gang, tragedy strikes when Dima travels by heleicopter to London, trying to convince Hector of the validity of his information.

There are some classical Le Carré constellations: the innocent couple abroad; the traitor within; and the “believer” who has to prove the guilt of the establishment traitor against the odds, whilst running a department of three. This being the 21st century, ideologies have vanished and it is all about money and nothing else. Skarsgard is the star, the classical anti-hero, with his long hair and even longer memories of the times of Stalinism. DoP Anthony Dod Mantle  has caught the two domineering worlds of this drama: the ruthless pursuit of money and the desperate getaway, all filmed in shadowy grey. The establishment, meanwhile – in Russia and Britain – bathes in the glittering lights of parties, theatre and football events ostentatiously showing off, while selling and buying alliances for the best price available: a stockmarket of commodities. Lewis’ Hector is the modern Smiley: in his case, it is not his errant wife, who trobles him, but his son, imprisoned for drug dealing. Hector suffers with the same dignity as Smiley, and tries to nail Longrigg with the same perseverance. OUR KIND OF TRAITOR is very well-crafted entertainment with some social criticism: enjoyable but not too taxing. AS