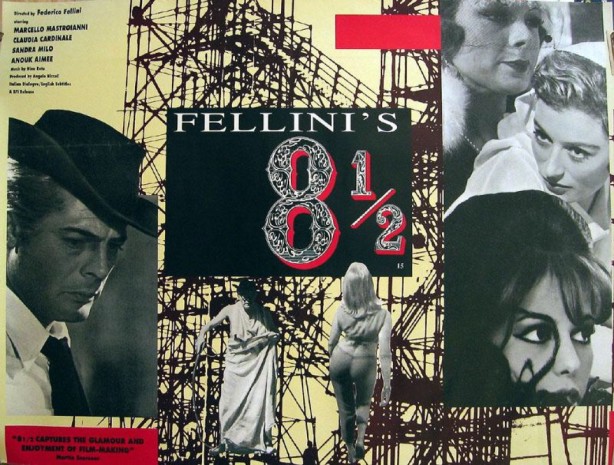 After the success of La Dolce Vita, Fellini decided that the time had come to make films which relied less on a narrative structure, but more on an aesthetic concept. 8 ½ turned out to be a self-portrait of the director, played by his “Alter Ego” Mastroianni and combined favourite themes from his earlier films in a vivid collage of carnival-like picturesque settings, questioning not only beliefs but the form of film-making itself.

Middle-aged film director Guido Anselmi (Mastroianni) tries to escape from the self-inflicted pressures of his personal and professional life to the spa of Chianciano. But his “harem” as well as his problems with his next film  compound to make his stay anything but relaxing. The original title of 8 ½ was La Bella Confusione (The beautiful Confusion), and Fellini literally throws everything into the mix: Anselmi’s dreams are interrupted by nightmarish visions from his childhood where he meets his dead parents on a cemetery and his guilty feelings towards Catholicism manifest themselves in scenes were he is haunted by clerics. His love life is equally bizarre: having invited his mistress Carla (Milo) to stay with him, he soon begs his long-suffering wife Luisa (Aimée) to join him in the circus which his life has become. His producer is very anxious that Anselmi starts shooting the film – instead of changing the script and having endless screen tests; the huge structure for an S-F film has been erected near the beach and the costs are mounting. But Anselmi is more interested in his past: he relives the dance of Saraghina, a frightening and alluring woman who chased the boys away. And whilst in reality he is ‘cheating’ both on his wife and his mistress, in his dreams he swings the whip, hoping to frighten them into submission. Enter Claudia (Cardinale), seemingly an innocent young girl, but really an opportunist, but Anselmi has retreated too far into himself to even try his vain charm on her. He dreams of suicide, before he turns the implosion into his only way out: he starts the film, incorporating actors and friends into a giant carnival of lost souls.

Fellini’s Anselmi is a sex maniac, a sadist, as well as a masochist, in love with myths (not real feelings), a coward, never having grown up from being a mother’s son, a fool, a phony and impostor. In one word, he is the archetypal Italian man of a certain class and education. In his review of the film, Alberto Moravia compares Anselmi with Leopold Bloom, the hero of James Joyce’s “Ulysses”: he is a neurotic, his failings make him withdraw more and more into an inner world where he tries to gain control. 8 ½ is a film, where reality intrudes into Anselmi’s nightmares and visions – not the other way round. Anselmi only seems to be in touch with his feelings as a young man – the images of the countryside in Emilia Romagna being the only peaceful ones in the whole film. AS

OPENING IN SELECTED CINEMAS NATIONWIDE FROM 1 MAY 2015