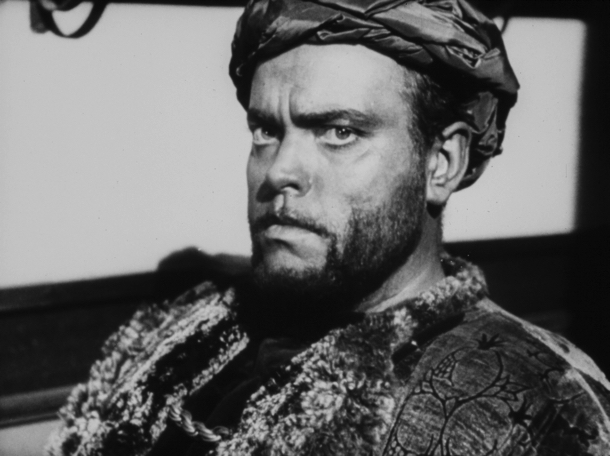 When he was more or less spurned by Hollywood and its money men, Orson Welles settled in Europe, where he hoped to find producers who were more open to art and creativity and less to lining their hand-tailored pockets. OTHELLO was due to be shown in September 1951 at the VENICE FILM FESTIVAL, but Welles suddenly withdrew the film, claiming it was not ready. It had its premiere in Cannes a year later, winning the PALME D’OR.

Welles’ OTHELLO is a brilliant mixture of German expressionism and film noir: Macbeth and The Lady from Shanghai rolled in one. The beginning is Murnauesque as the coffins of Desdemona (Cloutier) and Othello (Welles) are macabrely  carted along against a glowering skyline, whilst the treacherous Iago (MacLiammoir) is put into an iron cage and hung high up to rot in the boiling sun. Most buildings appear trap-like, in keeping with Welles’ noirish inventiveness. The main protagonist is caught out among the chiaro-scuro shadows like a raven in a bid to escape. OTHELLO is permanently in motion, in battle and in private scenes where Welles is seen tenderly embracing Suzanne Cloutier from the ceiling of their boudoir. As an outsider and a Moor the zenophobia is rife and he is forced to fight for his status as General, and for his bride, whose father does everything in his power to de-rail the marriage. Whilst Othello is aware of racial prejudice, he has a blind side: he desperately wants to be liked. As his Lieutenant, Iago is highly aware of this ‘achilles heel’ and works on it to maximise his influence over his Othello. Iago is a vicious and jealous character who looms large over Othello, despite being physically smaller; only at the end, in the cage, is he reduced to small animal – like a rat caught in a trap. Desdemona is a creature of light and empathy, a person without shadows. Even when Othello strangles her, white dominates his brutal act. Rodrigo (Robert Coote) is both victim and seducer – he believes Iago that he can capture Desdemona and insinuate himself into Othello’s position. But as Othello he is also blind: Iago has found two victims who are very much alike: insecure for different reasons, but both desperate to advance their statuses. The fleet, commanded by Othello, returns triumphant after the victory against the Turks, but Othello’s glory and ego ultimately surpass his love for Desdemona, thus sowing seeds for death and deceit. Production designer Alexander Trauner (Les Enfants du Paradis), and DOPs G.R. Aldo and Anchise Brizzi create an menacing, magical maze, from which none of the main protagonists can escape, Iago’s wife, becoming his last victim. Welles’ OTHELLO is far from being filmed theatre, its cinematographic power is equal to Shakespeare’s text. Without doubt it is one of the most fabulous experiences here at Venice Film Festival 2015. AS