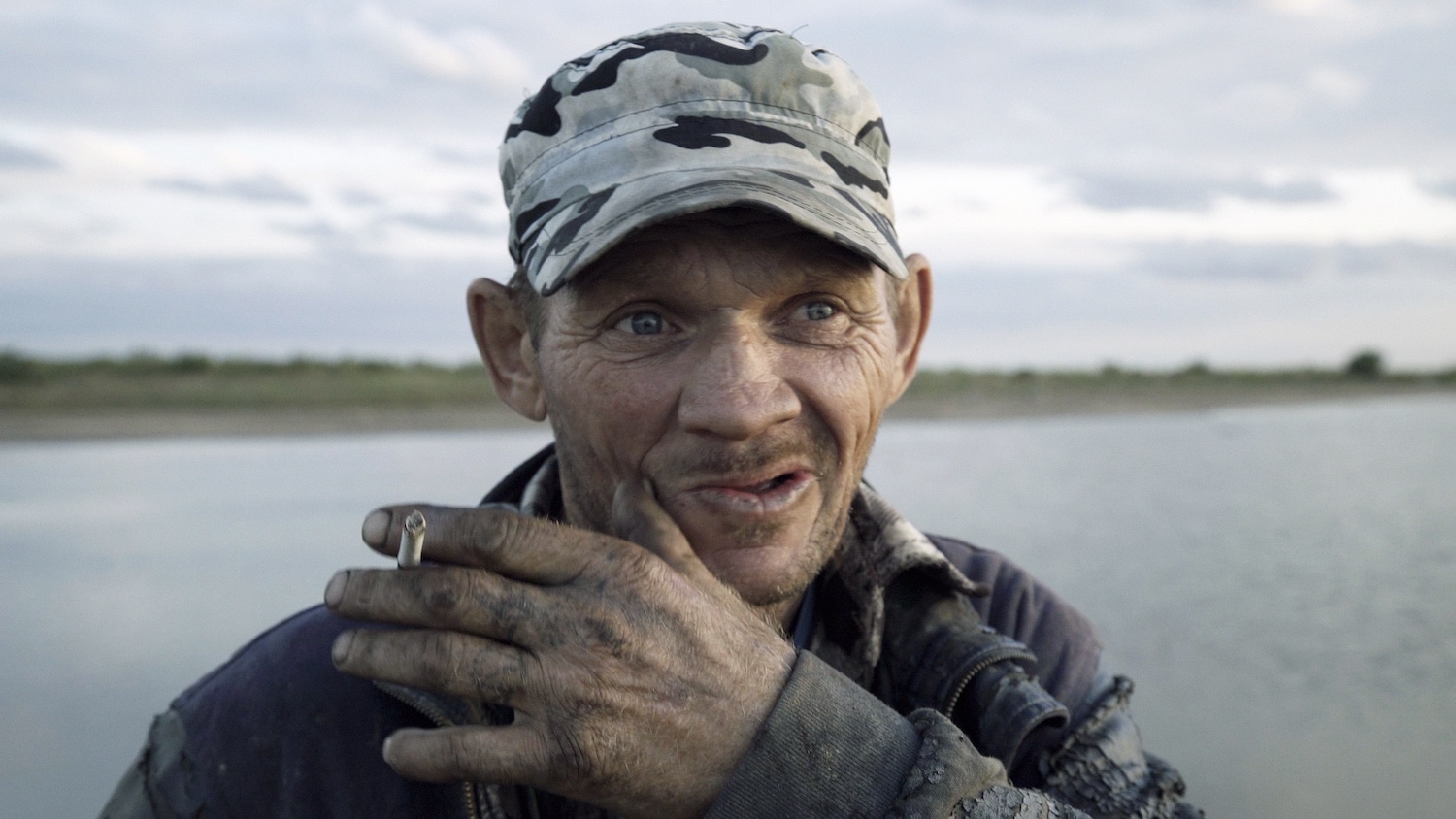 Time warps still exist even in the 21st century. And one is the island of Ostrov deep in the Caspian Sea. During Soviet times it was home to over 3000 people. Nowadays only a few survive, and most belong to a large extended family. Their existence very much connects to a global narrative of survival for small communities all over the world.

Writers/directors Swetlana Rodina and Laurent Stoop (Citizen Khodorkovsky) take a look at how life has changed there in past thirty years. There is still a hospital, a school and a kindergarten. Ivan (50) and Anna (45), occupy one of the homely wooden houses with their kids Alina and Anton. But their patriarch Tolya is not the only one living in the past.

Every day Ivan takes his ramshackle fishing boat out to sea, always aware of the coast guards who are keen to catch them fishing sturgeon, which for reasons not explained, is forbidden. In the “old days” of the Soviet Union, according to Anna, the family was prosperous, making a good living with sturgeon’s black caviar: another restriction not explained. Military police inspects the island every so often: what they are looking for is one of the many open questions.

Roman and Tamangiz have fled the mainland town to the island – but both are unhappy, being used to city life. Roman admits their poverty has destroyed their relationship, only the cats and dogs are contented stretching lazily in the sun. ‘Make do and mend’ values still survive here out of necessity,  Ivan is always repairing something or another – mainly his motorcycle, which has surely seen better days, probably built in the Soviet era. There is a war memorial for the dead of WWII, and the anniversary of 9th of May 1945 is celebrated.

On the newly acquired TV – it works, in spite of Ivan telling us there is no electricity – President Putin is the star attraction. In Donetsk, Russian soldiers give out Russian passports to Ukrainians, the annexation of the Crimea is celebrated. In Germany, meanwhile, Neo-Nazis are marching, revenge hungry, and one more reason for the war in Ukraine.

Anton has had enough of the propaganda but Ivan stays and complains the younger generation does not appreciate the old war songs any more. Not surprisingly, apart from getting drunk and listening to the army radio, there is not much for the youngsters on the island to do.

Tolya dies and is buried in coffin with an orthodox cross. Ivan asks his daughter Alina to take a letter to Putin – and when he doesn’t get a reply, he plans to write another. Meanwhile Putin plays the role of the humble statesman on TV.  Ivan refuses to blame Putin for the poverty on Orlov – he believes it is all down to the corrupt and incompetent administration. New Year’s Eve 2020 offers a chance to celebrate all round with drinking and dancing. Meanwhile, Putin hectors on about a bright future, Ivan praising him for building a strong army.

Dop Laurent Stoop is perfectly placed to play the “Fly on the Wall” – unobtrusive his pictures tell a thousand words. The soft limpid colours of the maritime setting give a lyrical feel to this contemporary story, that could be set a hundred years ago.

Orlov is one of many documentaries about Putin’s Russia, showing the parallels to the Soviet Union – minus the social structure of the era. Like Stalin before him, Putin’s obdurate strength is what makes him popular. The fault always lies with his underlings. Orlov tells a poignant story of  yesteryear, and displaced youngsters trapped in time between utter boredom and a glorious past. AS