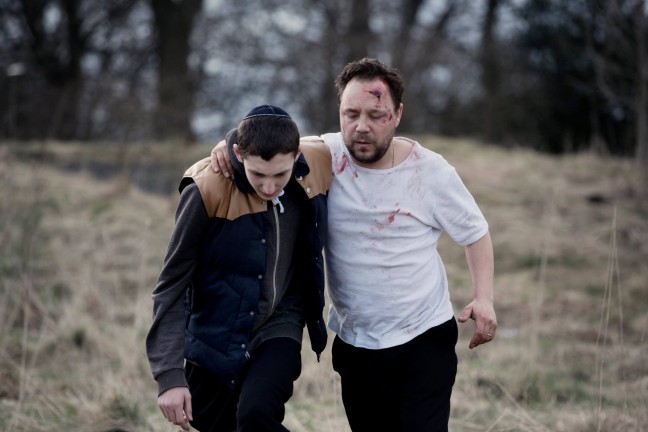 David Leon’s debut feature film debut  ORTHODOX  is really about the struggle of a Jewish man to keep his identity and make a living, whilst personal choices threaten to derail him. It has the same main cast as his 30 minute short film of the same title in 2012.

ORTHODOX has “Jewish Identity drama” written all over it: a young man secretly craves the approval of his father and the community, but his temperament is set against any compromises: he is a fighter, not only with his fists, but due to his determination to find his own way in life which is always undermined by his lack of judgement, leading him to pay for his guilt by keeping by committing criminal acts to keep himself in business.

Growing up as a orthodox Jew in North London, young Benjamin (Woollford) is teased and beaten by his school mates and takes up boxing to defend himself. This brings him into confrontation with his religious father, who disowns him, after his son insists on taking up the sport as a profession. The adult Benjamin (Graham) is over-compensating for his refusal by running his father’s butcher shop, which is running at a loss and that also alienates him from the Jewish community. Even though his wife Alice (Callard) hates Benjamin’s boxing in illegal fights to make ends meet, he is driven by self-destruction. Benjamin also totally misjudges the motives of the callous Shannon (Smiley) who is employed by the leaders of the Jewish community (among them Goldberg (Fairbank), to do the dirty jobs relating to tenant issues. Shannon simply delegates the harassment of the tenants to Benjamin – but after he burns down supposedly empty house, he finds himself in jail for the murder of a family. Shannon, who denounces him anonymously to the police, lusts after Alice and starts to threaten her. Together with Alice he is the victim of a systematic betrayal by the religious establishment, preaching humanity but persuading their profit-orientated activities with cold-blooded criminal means. When Benjamin returns from prison, he relies on more dirty jobs from Shannon, whom he still trusts. But when Benjamin meets young Daniel (Mancini), he also seems to be repeating all Benjamin’s mistake working for Shannon.

DOP Si Bell create a landscape of darkness, every location is imbued with gloom: the dilapidated estates, Benjamin’s home, the meeting place of the Jewish Elders and the boxing school where Benjamin picks up Daniel are all doomed, places of transition, soon to be abolished. The only light is in the flashbacks with young Benjamin: even though he gets beaten up, he stands up and fights back. Later on, all his strength has been sucked out of him, mainly by Smiley’s Shannon, a towering example of sheer creepy beastliness, reaching a level of Shakespearian proportions. Orthodox is a raw, uncompromising peace of drama featuring the destruction of man by a hypocritical religious establishment. AS