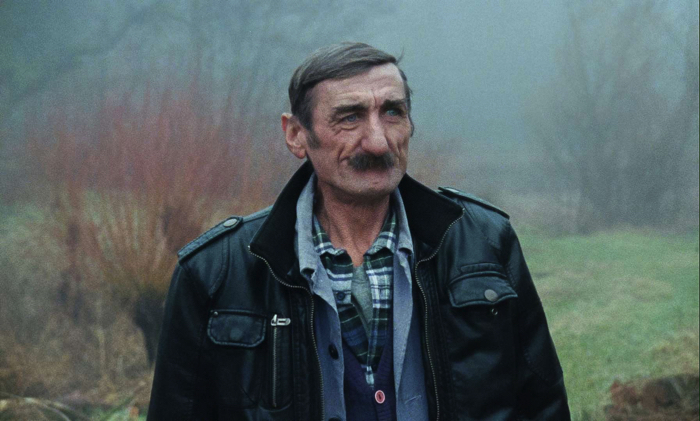 Writer/director Matjaz Ivanisin follows his critically acclaimed documentary Playing Men with a haunting portrait of loss in a small town Slovenia. Adapted from Zdravko Dusa’s short story ‘And That is Exactly How it Was’ Ivanism slowly pieces together the events leading up to the recent demise of a villager in a mystery that plays out like game of Poker, his life story seeping out despite the blank faces and evasiveness of his fellow townsmen.

Ivanisin sets the scene in the slow-burning opening sequences gradually building up a picture of this tight-lipped community: in a community kitchen, meals are prepared in huge thermos flasks which are carefully put into a delivery van. A driver then drops these off at the various different houses. And slowly they are taken in – all apart from one household. Not long after a local woman knocks at the door of the house in question and her suspicions are aroused when she gets no answer. Dropping round at the pub to see what gives, she raised the alarm and several men trudge round to the house to make further enquiries.

This is a remote and close-knit village where news travels fast, and soon we see a body being removed from the house. It later emerges that Oroslan had a son and he starts to share his grief with the others revealing more information about his father’s private life with a woman called Irwanka, who could have become his stepmother. “But I made sure that they could not marry, and my father never forgave me”. More and more seeps out: his father’s alcoholism and epileptic fits.  A neighbouring woman tells the story about Oroslan passing out one day after a fit, and waking up to imagine himself in Heaven, because the woman was wearing white. Anecdotes and more snippets of information gradually seep out about his work and love life. Poignantly, an Alsatian waits outside the old man’s house waiting ruefully for his return.

Oroslan is brief but affecting despite its compact running time, certainly living up to the title of the short story: in just seventy-two minutes, a whole life is captured. Gregor Bozic’s grainy 16mm camera sketches out the intimate character of the narrative. Bold and sensitive, this is a little gem. AS