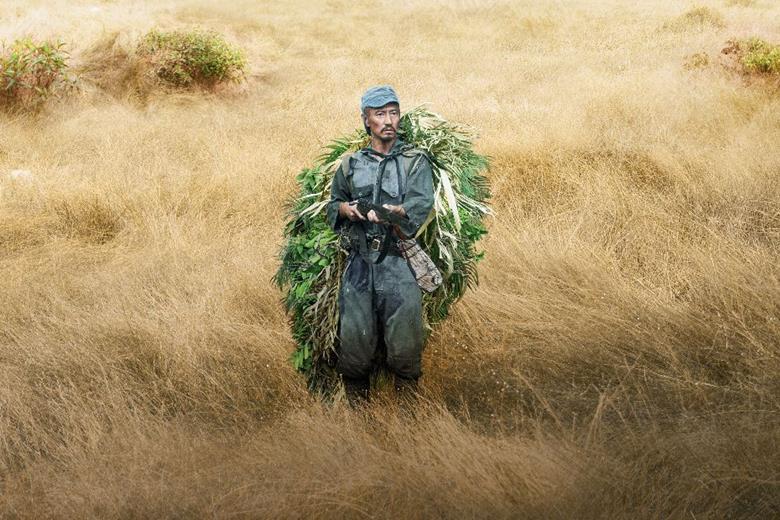 French director/co-writer Arthur Harari collaborates with Vincent Poymiro and Bernhard Cendron in chronicling 29 years in the life of the titular Japanese soldier Hiroo Onoda (1922-2014), who for nearly thirty years hid in the jungle of the Philippine island of Lubang, fighting a war which ended in September 1945.

Towards the end of WWII, young Hiroo Onoda (Endo) is chosen to be a Kamikaze pilot. But Hiroo – in contrast to many of his peer group – does not want to die, and he refuses to fly, citing vertigo for his decision. This brings him to the attention of Major Taniguchi (Ogata), who runs a school for secret war activities: Hiroo is told never to commit suicide, or surrender to the fast advancing American troops.

On the Philippine island of Lubang, Onoda is witness to the overwhelming power of the American army. But true to the promise he has given to Taniguchi, he refuses to concede defeat, and gathers a motley crew of three other soldiers embarking on a guerrilla war against the island’s population: “The four of us can kill hundreds”. One of the resisters, Akatsu, deserts in 1949 but Onoda battles on in his own private war still believing the islanders are in alliance with the Americans.

History this may be, but Onoda would be very much at home today: refusing to believe that the war has ended, despite all signs to the contrary. Everything signalling the truth is hailed as ‘Fake News’; even Hiroo’s father speaking with a loudhailer to make his son accept reality. For Hiroo, it is not the voice of his father, but an actor paid by the Americans. And on New Year’s Day in 1950, Onoda and Kozuka await a rescue party after they have “decoded” leaflets and other written material left for them by the population.

Harari tells the story from the POV of Hiroo: we live in his head, hear his inner dialogue, and apart from the overwhelming running time of nearly three hours, there is much to appreciate: Kanji Tsuda as the older Onoda is outstanding amidst an impressive cast. And there is always humour and irony: when Hiroo and Kozuka make a map of the island, they use names from their pre-war life experiences. And, strangely, there is sometimes a sort of beauty in the wild phantasies of a man who cannot give up his dream of becoming a hero, the guilt of his refusal to sacrifice himself as a pilot driving himself on. AS

ON RELEASE AT SELECTED ARTHOUSE CINEMAS