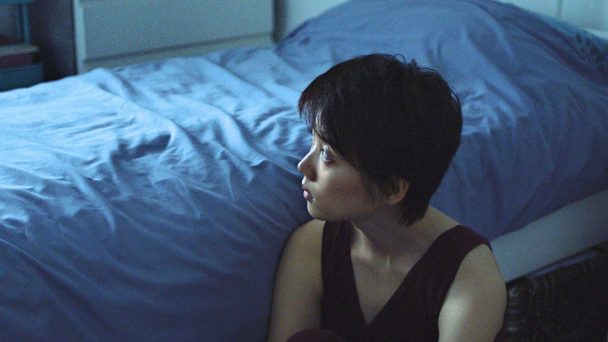 Chinese director Zhou Zhou follows Meili (2018) with another thoughtful female-centric story of alienation this time exploring the isolation of a young epileptic woman in North Eastern China. Zhou Zhou co-scripts this delicately drawn arthouse gem with Yun Chi who also plays the central character with subtle fleeting gestures and charming vulnerability. Chi Li has a job in a cinema and a roof over her head in her aunt’s house who is away in Australia when Chi Li meets a boy who seems keen to get to know her. Although initially things go well this romantic attachment seems to unlock and intensify her confidence as well as her defensive feelings while bringing out the protective side of her new friend.

Li Chun-yu’s muted visuals convey this tentative prelude to love on the widescreen and in intimate close-up as the couple explore the surrounding countryside and neon-tinged urban settings together, Chi Li growing more relaxed and confident as her life story is teased out during the couple’s gentle interactions that also introduce moments of humour. However, a night out to a dance performance painfully reminds Chi Li of her past as a dancer and when she finally meets the boy’s mother it becomes clear that the relationship is not going to be as unproblematic as it started out. Traumatic scenes follow as Chi Li deals with her demons alone in sequences complimented by Fabio Anastasi’s sensitve score that echoes the changing rhythms of Chi Li’s emotional landscape.

When her aunt returns and decides to sell her house inviting Chi Li to join her in Australia, she is forced to make some radical decisions, but already feels more prepared for the challenge. Only You Alone is a graceful and life-affirming drama that ultimately reminds those suffering in silence that the key to emotional security always lies within ourselves. MT