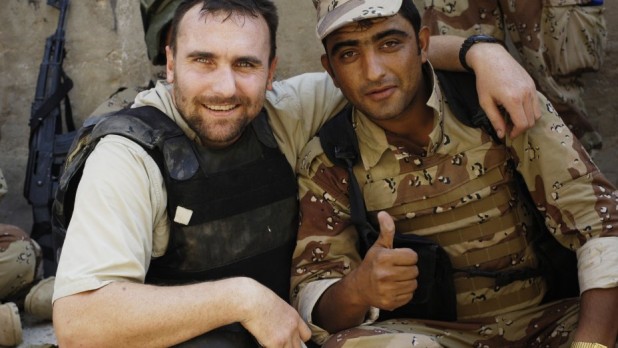 A shocking hand-held video diary of the unravelling Iraq War invigorated by former Time and CNN journalist Michael Ware, who takes us through his stream of consciousness and comes to a stark conclusion.

When Ware heads out to Iraq his frame of mind seems sturdy and upbeat but the toll of bombings and hostilities gradually wear him down and his tone becomes more ruminative as he becomes increasingly appalled and obsessed with the rise of Abu Musab al-Zarqawi and the dark and distinctly sinister beginnings of the Islamic State.

There’s nothing really new to report here but plenty of horrific images of suicide bombings and dismembered bodies; the documentary playing out like an extended youtube clip from the frontlines, distilled down to just over an hour from over ten years of footage recorded and brought to the big screen by director Bill Guttentag and co-writer Justine. Taking a scattergun approach, the film rambles on unevenly with a disorientating feel as limbs fly and vehicles ignite in the mayhem. Daniel Berg’s execution is shown and the car bombings at the Jordanian Embassy (2003). What the film does do to personalise the invasion and contextualise it within the evergreen theme of war and man’s tendency to succumb to a holocaust of psychopathic indifference towards his neighbour, whether soldier or civilian. This is particularly evident in the final scene of unspeakable horror.

In 2004 Ware headed up Time as it’s Bureau Chief in Baghdad and this leads to him becoming more directly involved with the insurgents as a go-between. He is responsible for publishing the famous tape of Berg’s execution but Ware stops short here of greater illumination and insight into his moral responsibilities as a journalist. He remarks, contentiously, that the American forces appear to be losing control in region.

The major climacteric of his term of office is where he avoids decapitation himself and is saved by one of his insurgent guides during a sortie in into the streets of Baghdad where his car is stopped by a man with a grenade. Rather than showing the ensuing footage, Ware only reports the events in narration, robbing the film of powerful visual impact. As the the saying goes “a picture tells a thousand words” and this lack of visual proof detracts from the narrative. Although the documentary raises provocative issues surrounding soldiering, reporting and voyeurism in a conflict zone, as chief protagonist, Ware appears at times to lack confidence in his mastery of events that took nearly a decade of his life.