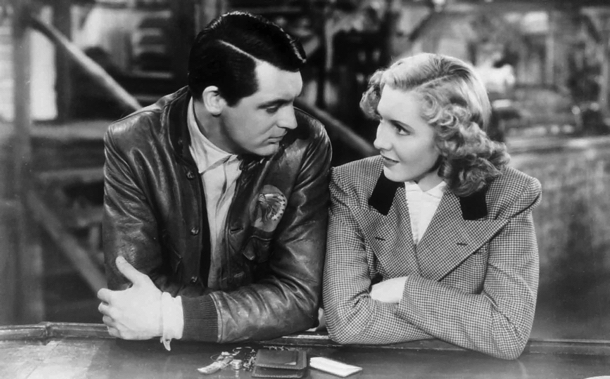 Set in a isolated trading port of Barranca in South America, ONLY ANGELS HAVE WINGS is the typical Howard Hawks film: a woman trying to join the company macho men, who in this case, all seem to have a death wish. The men are pilots working for a small aviation company which is trying to gain a new, lucrative contract. For this to happen, the old clapped out planes have to overcome fog, storms and mountains – and never mind, what happens to the pilots.

The homo-erotic aspect of the male relationships is apparent here as it is in Hawks’ other aviation films. So is the oedipal complex: not for nothing are the younger pilots calling Geoff “Papa”. A film critic wrote to Hawks after the premiere, that he “was going to far”, questioning the reality aspect of the film. Hawks answered, that the story was the pure truth, since it was told to him by a Mexican pilot. Elaborating on this original story, Hawks told with pride an encore, which is indicative of the film’s ideology – and humour: “A friend of the bridegroom put a German aviation equipment under the bed of the newly married couple, to measure their sexual activities, by the bouncing of the bed. When he showed the couple the graph, the bride was so pleased, that she hung the graph of the wall”. This little episode somehow explains everything about the psyche of the director and the misogynist nature of the film.

Pianist cum singer Bonnie Lee (Arthur) is stranded at the airport, nothing more than a ramshackle little building, which houses everything needed, including a restaurant. Pilot and boss Geoff Carter (Grant), misogynist par excellence, introduces himself to Bonnie just after a pilot has been killed. “Joe died flying. That was his job. He just wasn’t good enough. That’s why he got it.” Then he tucks into the steak, the dead man had ordered. Bonnie is overwhelmed by such coldness and the ensuing dialogue shows where the two stand : “How could you do it?”/What?/Eat that steak./What’s the matter with it?/It was his/Look, what do you want me to do? Have it stuffed?”

In spite of this, Bonnie is falling for Geoff, against her better judgement. Shortly afterwards, Joe’s replacement, Bat Mac Pherson (Baserthelmess) arrives. He has once left a mechanic on board of a crashing plane, bailing out himself. He is “yellow” and Geoff lets him have it: “I can send you out in any kind of weather, on any kind of job, and only worry about the ship getting back. On those terms, do you still want the job?” Bat accepts the job, and later regains the respect of his fellow pilots, risking his life, trying to rescue a co-pilot. But his wife Judy (Hayworth), Geoff’s ex-lover, soon makes Bonnie jealous, and sets a story in motion, which ends with Geoff telling Bonnie to toss a coin to decide if she wants to stay with him.

The narrative’s set is claustrophobic, the camera seems to have no room to manoeuvre, the protagonists are pressed together like fish in can. Only Angels have Wings is a ‘Boys Own’ adventure, any social connections are missing. Geoff, like the rest of the pilots, is more in love with death than life, unable to form any lasting relationships with women; they talk in shorthand, and hide whatever emotions they may have.

ONLY ANGELS HAVE WINGS is best remembered for being the first film starring Rita Hayworth, who was casted more or less against the will of Hawks by Columbia boss Harry Cohen. Hawks complained later that she was not a good actress – how wrong he proved to be. AS