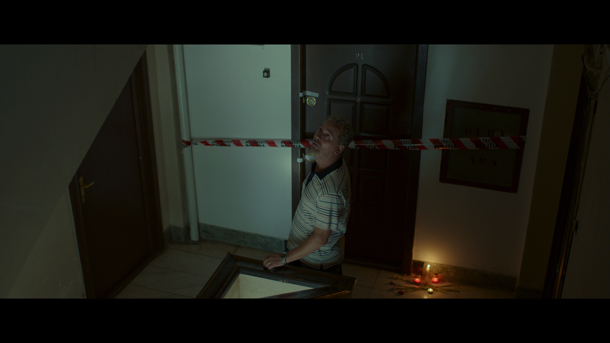 Sandu Patrescu, the middle-aged anti-hero of Radu Muntean’s Un Certain Regard hopeful, ONE FLOOR BELOW, has a reason to be tight-lipped and dour. He grew up during the sinister communist regime of Romanian dictator, Ceausescu.

Living with his wife and geeky son in the faced glory of an Art Nouveau building in a leafy suburb of Bucharest, he walks his golden retriever Jerry in the local park, enjoys a close and lovingly respectful relationship with his mother and runs a successful car hire business. In this middle-class, Sandu keeps himself to himself so when he overhears raised voices and salacious goings on from the flat below, he guiltily decides to draw a veil over the proceedings but and tells the Police nothing when they arrive to investigate a woman’s death downstairs in the block of flats.

Muntean’s meta drama is exquisitely framed but rather sinister in tone as its slow-burning narrative gradually ignites into a flaming finale in the third act; always playing its sombre secrets close to its chest.

It turns out that his neighbour Dima (Iulian Postelnicu) who lives with his wife in the flat below, has been having sex with the dead woman. And when an ambulance arrives to remove the bodybag from her ground floor home, it emerges this was not just an accident.  So when Dima asks Patrascu to help him change the title and deed of his car, his focus sharpens on this suspicious young man, who seems over-gracious and quite cocky his wife and son.

There is a great deal of watching and waiting in this tense and protracted psychodrama, but Sandu’s uneasiness gradually starts to permeates each calm and well-composed frame. Mundean’s minimalist new wave drama takes a Zen approach to crime-investigaton that will appeal to arthouse enthusiasts but may not suit those looking for a faster-paced thriller. This is a story that is more about the journey than the destination. MT