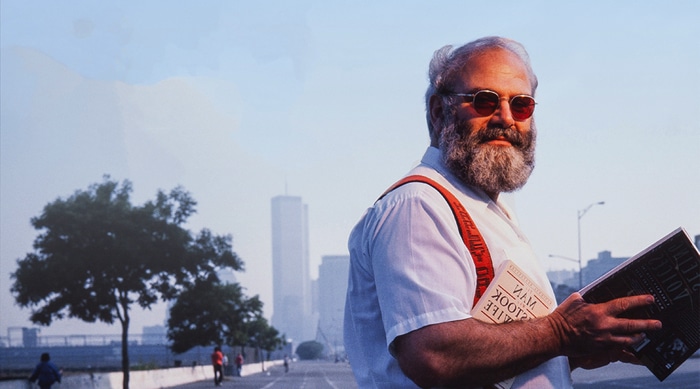 The final six months in the life of eminent clinical neuro-psychologist Oliver Sacks (1933-2015) are the focus of Ric Burns’ immersive biopic. Filmed in the Sacks’ Greenwich village home and taking its title from his New York Times essay of February 2015, penned on discovering he was dying with terminal cancer, this warmly enjoyable portrait reflects Sacks’ compassionate nature as well as his courage.

Sacks appears to make a graceful exit from this world; writing, talking and loving to the end. Not that the doctor’s life had always been so harmonious and well-structured – on the contrary – his homosexuality and extreme shyness, which he blamed on his prosopagnosia (Face blindness), a neurological defect which some of his patients shared.

Born into an orthodox Jewish family in Cricklewood, London in 1933, he was destined to become a medical doctor: both his parents were members of the profession, so were two of his older brothers. Oliver was his mother’s favourite but when she found out he was homosexual (at the age of 18), she declared “I wish you had never been born.”

Oliver and his brother Michael had been evacuated during the Blitz to a boarding school in the Midlands where both were bullied and beaten. Michael was so disturbed he developed full-blown schizophrenia. Oliver was physically strong, but very timid, and on his 18th birthday let his parents know his plan to move to the USA. In San Francisco and LA he found a life very different from that in repressive London. Achieving a weight-lifting record from his body building he also became addicted to  amphetamines and his BMW motorcycle. His sex life was a disappointment: he constantly fell for straight men and after a birthday encounter in 1963 at the Hampstead Ponds, on a short-lived return to London, he turned celibate for 35 years.

Back in the Bronx Sacks’ life hung in the balance during a fellowship at the Albert Einstein College. And by New Year’s Day 1966, came the realisation his drug habit had to go. In its place came writing. Seeking the help of psychoanalyst Leonard S (the two where still “getting there” by the end), the late 1960s saw him working at Beth Abraham Hospital, where he discovered the beneficial effects of a dopamine replacement drug (L-DOPA) on victims of the encephalitis lethargica pandemic of the 1920s. His patients recovered and shared their experiences during “Lock-Ins”.

Unfortunately, Neurology had acquired a bad name largely as a result of the widespread practice of lobotomising difficult young schizophrenics, but Sacks’ work with kids in this area was too subjective and therefore regarded as ‘unscientific’. In 1973 he was sacked for criticising the practice of putting troublesome young patients suffering from Schizophrenia into solitary confinement.

But his book on EL, entitled ‘Awakenings’ was not well-received, and his colleagues shunned him. To make matters worse, he had written it during a rapprochement with his mother, who then died during a trip to Israel. So disturbed was he at her loss that he injured his leg during a hiking accident (an obvious act of self-harm/suicide) and it took him years to regain his full mobility. This was made worse by his relationship difficulties – homosexuality was a crime, and even an admittance would mean the end of a career. Prison terms and chemical castration were common punishments. (Ironically Penny Marshall’s 1990 film version of Awakenings, with Robin Williams and Robert de Niro, was nominated for three Oscars).

In 1982 Sacks met the editor Kate Edgar, who became his mother surrogate: organising not only his writing output but running his day-to-day life. Sacks output was prolific: his books are always centred around neurological topics, like the aforementioned Prosopagnosia, which he tackled in “The Man who mistook his Wife for a Hat” and “Egnosias”. His love for music was the main theme in “Musicophilia”, “The mind’s Eye” is a research into the brain recognition process of seeing moving images, where a neurological disorder can slow down our recognition process to a slow motion tempo.

Sacks was an explorer of the mind, observing and empathising with his patients, he became completely at one with them during the treatment process. He considered the hierarchical structures which dominate medicine to this day as deleterious to the profession.

DoP Buddy Squires close-ups of Sacks dominate the feature, with Burns keeping proper distance from his subject – apart from at the end, when he chronicles his late-life relationship with NY journalist Bill Hayes, whom Sacks met in 2008. This story of an outsider who became the part of a professional mainstream tainted by decades of patient mistreatment is an enjoyable and informative watch. AS

NOW ON release in Cinemas