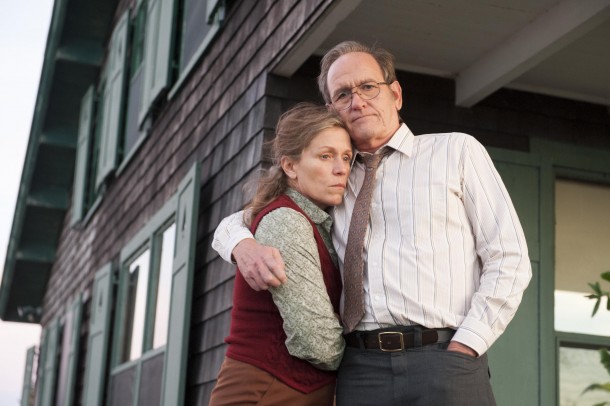 Based on the novel of the same name by Elizabeth Strout, HBO’s production of the TV series is carried nearly single-handedly by executive producer Frances McDormand in the title role. Bullying her way through 25 years of recent history in the small seaside town of Crosby in Maine, New England, this is peach of a role for a middle-aged woman who plays her cards close to her chest and whose strength lies in her depiction of a woman who is not weak, tearful or vulnerable.

Olive is a Maths teacher in Middle school, her long-suffering husband Henry (Richard Jenkins, in fine form as a beta male), a pharmacist. Their only son, Christopher, is treated by his mother with the same disdain as the rest of her family in particular – and the rest of Crosby in general. Olive is not able to empathise with any of the other characters – with the possible exception of her teaching college Jim O’Casey (Mullan), a melancholic, caustic, sullen alcoholic, who loves the same nihilistic poems and novels as Olive – and, like her, looks down on everyone. Unfortunately for her, O’Casey commits suicide, before she can declare his love for her: never in the film do we see her nearly as emotionally broken as when she learns about his suicide, camouflaged as an automobile accident.

Henry, owner and proprietor of the local pharmacy, meanwhile seeks solace in the company of his employee, young Denise Thibodeau (Kazan), a kind and shy child woman, whose husband is killed in a hunting accident. For a moment we wonder if Henry will make the break from Olive: he buys Denise a cat to console he, whereon Olive comments that “he bought the mouse a cat”. But Henry is a coward, and lets the opportunity slip by. Her negation of others is nothing but self-negation.Olive manages to fall out with everybody – apart from Henry who is unbelievably stoic in his approach to life with Olive, is this a brilliantly-observed and well-acted ‘soap opera’.

Even though made for TV, OLIVE KITTERIDGE does not cut corners, the character studies are detailed, the analysis of small town life realistic, and always with the right sort of humour. The souls of the American petty-bourgeoisie are looked at with a critical eye, but with warm understanding of their shortcomings. Olive herself is the monster, in spite of her superior intellect. The camera always tries to show life from different angles, and the colour palette, particular in the many autumns we witness, are particular impressive: the beauty of nature, is rather spoiled by many of the Maine denizens – but most of all by Olive. Lisa Cholodenko (The Kinds are Alright) keeps the same rhythm in spite of the four-hour length , which, despite its off-putting title, is grippingly watchable from start to finish. When was the last time, one could say that about a Hollywood film?