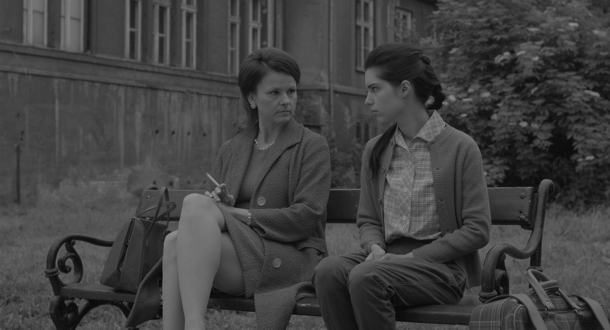 Glowing in Adam Sikora’s luminous black and white photography, I, OLGA HEPNAROVÁ is a stylised debut drama telling the true story of a mentally unstable teenager who became a cold-blooded killer in 1970s Czechoslovakia.

Olga Hepnarová was born in Prague in the early 1950s. An unhappy and alienated childhood made her reject her family and after an attempted suicide lead to a spell in a psychiatric institution, her career as a manual worked was brought to an abrupt end when she drove an HGV into a crowd of people at a tram stop in the city centre.

The subject matter is grim enough, but Tomas Weinreb’s spartan linear narrative gives this moody and at times explicitly sexual gay-themed character piece a detached and clinical feel so that it almost feels like a caricature of Eastern Bloc stricture. This acetic treatment feels too emotionally chilly and insubstantial to spark any mainstream interest outside the LGBT or arthouse crown who will be intrigued by Michalina Olszanska who plays the perverse and glowering chain-smoker with poise and an almost wilful insouciance.

The life of a mass murderer is surely rich in dramatic potential yet I, OLGA HEPNAROVA is completely devoid of drama. It initially feels as if Weinreb has failed to get under the skin of his anti-heroine, who remains a cypher throughout, not really appearing to care about being bullied at school, or ostracised in the mental home. The only time she shows emotion is during sex. And yet, in some ways, this is the perfect portrayal of a psychopath, who feels absolutely nothing for others, yet demonstrates a well concealed but seething narcissistic rage when ignored or thwarted, which is exactly how Olszanska plays Olga. It certainly explains Hepnarova’s anger which later erupts as revenge on the society that has failed to recognise her worth and potential. The final bathetic denouement has absolutely no impact in dramatic terms, coming without any warning or build up and almost seeming like an irrelevance until the police arrive, when we realise what exactly has happened – blink and you almost miss it.

Klara Meliskova is subtle and quietly affecting as Olga’s disappointed yet restrained mother but this is Olszanska’s film and she dominates it with a powerful sense of entitlement and denial. The final scene is a masterpiece in stiff upper lippery. MT

OUT at SELECTED VENUES ON 18 NOVEMBER 2016 BEFORE THE FILM LAUNCHES ON MUBI LATER IN THE MONTH.