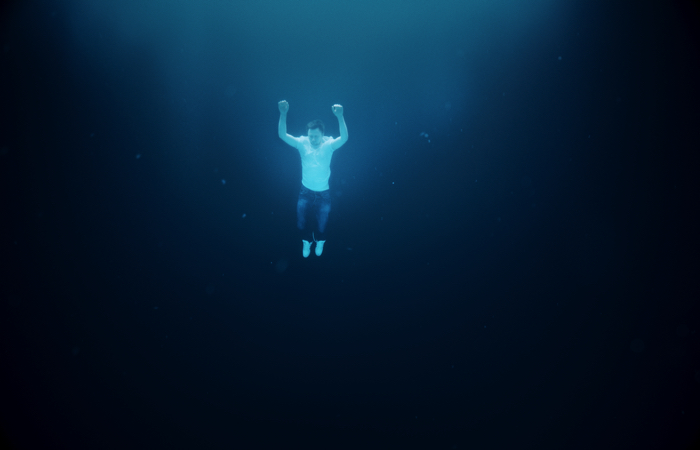 Director/co-writer Juris Kursietis (Modris) has created a spare but thrilling feature about a Latvian emigrant in Belgium, who falls under the spell of an evil smalltime gangster from Poland. Long takes and agile handheld camerawork along with some poetic under-water scenes make for an affecting verité drama. A twist of subversive humour lifts Oleg out of the   ‘grim and depressing’ category often associated with realism.

Oleg (Novopolksi) recalls how he was deeply affected as a child by his grandmother’s tale of the sacrificial lamb. Broke and in debt he feels just like that lamb in real life. A vision of him trying to breaking through the ice as he struggles under water occurs frequently throughout the film. Eventually he lands a job in a meat processing plant in Ghent where his training as a butcher comes in handy. Unfortunately, one of his illegal co-workers is maimed in one of the machines, blaming Oleg for the accident. His mates force him to take the rap in order to avoid an investigation. Back home – and jobless Oleg again – he meets the gregarious and charismatic Andrzej (Ogrodnik), who organises a motley crew of East-Europeans, hiring them out to do various jobs.

But Andzejs turns out to be a conman, who hardly ever pays his men. Oleg runs away, even though he fancies Andrzej’ girl friend Margosa (Prochniak), who is in thrall to her sadistic boyfriend. Alone in the streets at Christmas time, Oleg walks into a Latvian restaurant and is mistaken for an actor by rather posh Zita (Zarina), who runs the place. After a night of lovemaking, Oleg confesses he’s not really an actor, and is thrown out. Briefly returning to work for Andrzej things don’t improve and so he goes to the police, and informs on the gangster, having asked his grandmother to do the same in Latvia. Now at a lose end and with his freedom back, Oleg buys a plane ticket to Riga, but the night before his flight, he meets Margosa.

Despite of the underlying harshness of the narrative this is a bracing account of life as an immigrant. Andzejs gives Oleg a ‘forged’ Polish passport, calling him a “Novopolski” and the scenes in the meat factory are extremely brutal – and if you’re still not a vegetarian, you might now change your mind. The bleached-out aesthetic seems to mirror the hollowed out lives of these illegal workers, and the underwater sequences reflect Oleg’s feelings of desperation and powerlessness: struggling to survive in every way.  Kursietis seems to have re-invented social realism, or at least put a new appealing face on the genre. AS