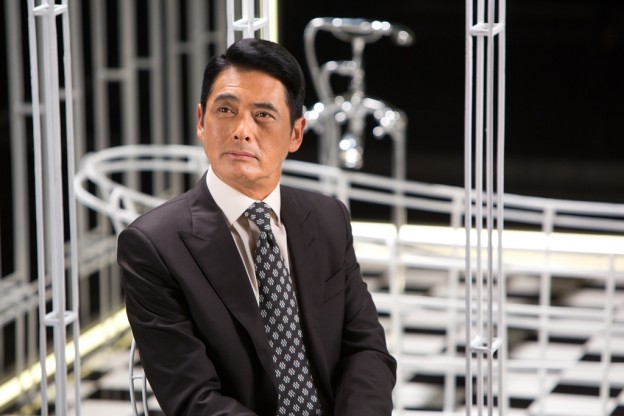 Johnnie To’s stock in trade has been violent gangster movies and recently those gangsters have been capitalists in suits as in: Life Without Principle (2011), Don’t Go Breaking My Heart (2011) and its sequel (2014), deal with life at the upper end of the corporate world.

Set in the premises of the Chinese company Jones & Sunn before and after the world wide financial crisis, started by the collapse of Lehman Brothers, OFFICE is a musical – but very much nearer to Brecht than any Hollywood musical. Shot in cinemascope and 3D with rather eclectic lyrics, production designer William Chang has created a corporate structure of black, white and grey, with a central clock (shades of John Farrow’s Big Clock from 1948) reminding all protagonists that their time is running out. Jones & Sunn are going public on the stock market and are preparing their IPO’s. One of the leading men is Lee Xiang (Ziyi), who sems to be omnipotent to a degree that we sometimes believe that he is pure satire.

Lee works in tandem with a female employee, in this case the somehow overqualified Kat (Yueting), who appears to be a plant. At the top, the leading couple of CEO Winnie Chang (Sylvia Chang, who adapted her own play ‘Design for Living’ for the screen), is a real low-life, well suited to having an affair with chairman Ho Chung-Ping (Yun-fat), who creeps in and out of the hospital room where his comatose wife is fighting for her life. But the most reckless character is the chief executive David Wang (Chan), who cooks the books mercilessly, or tries to seduce another major player like Sophie (Wei). When Lee and Kat perform a love duet, the “fake it till you succeed” mood of the film is highlighted.

Overall though, the musical numbers are not particularly impressive, certainly no catchy rhythms to sing along to; perhaps the high-pitched chorus playing over the opening and final credits could qualify for a signature tune. OFFICE is always ready to parody: when the highly-charged employers stream to the elevators, all eyes glued to their smartphones, their lockstep recalls Chinese films of the past, when crowds walked the same way in Odes to chairman Mao. The parallels go further: just as Mao did destroy his erstwhile followers in the Cultural Revolution, so does the capitalist system does away with the men and women, who created it.

In spite of all the achievements of all departments and the actors, notably DOP Siu-Keung Cheng, who created a look of constrained chaos, OFFICE is much less than its particular parts. All elements in themselves are near brilliant, but there is no cohesion. To’s detached style doe not help: it is like watching a procession of single units, but somehow the unity is missing. Which is a shame, because Office cannot be faulted in any way – it is just like an elaborate,wonderful charade without any emotive power holding it together. AS