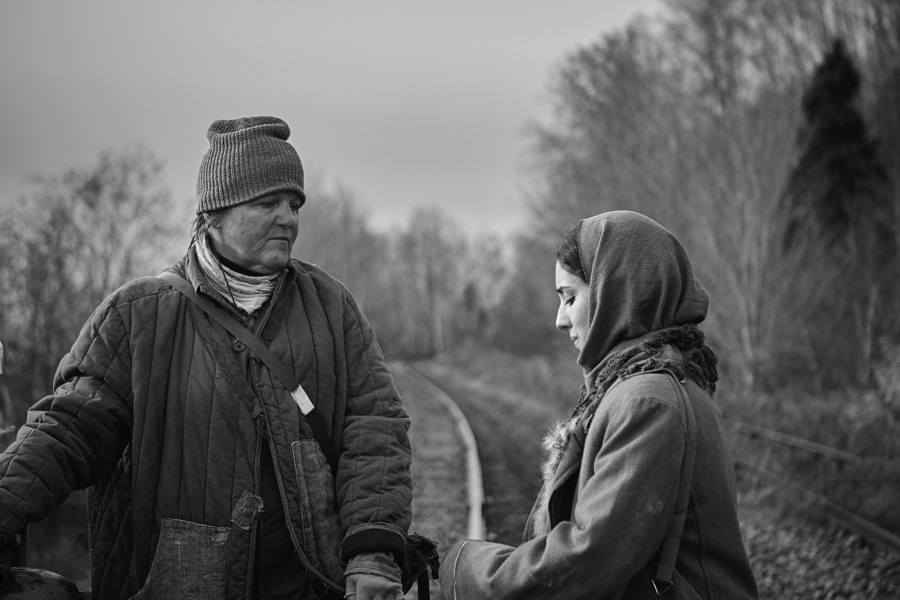 Canadian writer/director Simon Lavoie borrows heavily from Bergman and Tarkovsky for this sketchy story about civil war in an unknown country. Using odd formats, like a 11:8 ratio, Lavoie’s feature relies on the stunning black-and-white photography of his DoP Simran Dewan – but you cannot rely on images alone to carry a film, however enigmatic.

Filmed in Quebec, Canada No Trace opens with a four-minute close-up of rails, filmed from the moving handcar, which is owned by ‘N’ (Gosselin), who looks like a trapper from a Western. She later emerges a hardened people smuggler who is guiding Awa (Doummar) and her baby daughter. N is afraid the child’s crying might alarm the guards at the border. But all goes well, and Awa will eventually meet up with her husband. But N loses her vehicle – and soon – her way in the forest where she later meets Awa, who has ben raped. N also finds the body of Awa’s husband, and her daughter who has been burned on the sticks.

The two survivors are hostile, with Awa, a Muslim, constantly praying. Lavoie wisely leads leaves the final stretch of his feature open-ended  fitting for a film with such a flimsy narrative.

A heavy, menacing score underlines the tone of gloom and doom and the threatening atmosphere, the screen goes blank for a time without any explanation and sometimes garbled language replaces proper dialogue. Nulle Trace is dressed up as arthouse fare, the title ironically symbolic of the lack of artistic coherence. AS