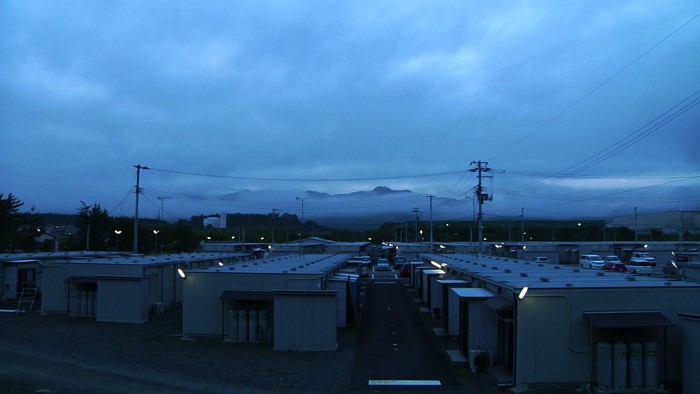 Director Funahashi follows the refugees from Futaba on their long journey for an honourable resettlement. The accident at the Daiichi Nuclear Power Plant in Fukushima in 2011 made their town uninhabitable and killed 53 of them). Funahashi takes things from where he left them in Nuclear Nation at the end of 2012. The plant is still leaking and the 6942 ex-inhabitants of Futaba are living all over the province. The mayor, Mr. Idagowa, blames the government and TEPCO, the Atomic Energy Council, for the delays in the re-settlement of the town’s people, but his opposition holds him responsible for the delays and has him removed after a non-confidence vote.

On the second anniversary of the disaster the tone is solemn but progress has not been made. Particularly the elderly are suffering in makeshift accommodation in Kisai High School, where 801 days after the incident, 123 people are still living and sleeping in a vast room, which was once the art department of the school. Archive films show us Futaba before the first reactor was built in 1967: ramshackle buildings and a poverty-ridden countryside. By 1978, when reactor number six and seven were built, the town was booming. A café owner reports that his income doubled every year, “we had forty years of good time”. A huge sign at the entrance to the town, proclaims “A prosperous future for the birthplace of Nuclear Energy”.

Some of the inhabitants go back to the town for a limited two hours, to rummage around, putting down anti-rodent poison, trying to salvage some items, but knowing very well that they will never return to Futaba. The new mayor is as helpless as the old one. During a meeting in posh hotel, he has to admit that the inhabitants of Futaba are living all over the province, divided not only by distance but different categories of support, which is not good for unity. At the same meeting, the Energy minister blames the media for the “demonisation” of the Nuclear Power industry. At the end of 2013 the last refugees leave the Kisai High School, together with the administration – the latter would return in early 2015. By then, an area has been designated for de-contamination, many buildings in the town will be lost for ever, even though the government has declared “that radiation will not leak beyond a certain point” – but nobody believes any more what comes out of Tokyo.

NUCLEAR NATION II is impressive because it avoids dramatics and listens to the refugees. The cinematography is inventive showing the small details underlining the misery for the sad victims. Funahashi avoids the usual talking heads as much as possible leaving the audience space for imagining the tragedy and contemplating the misery.AS