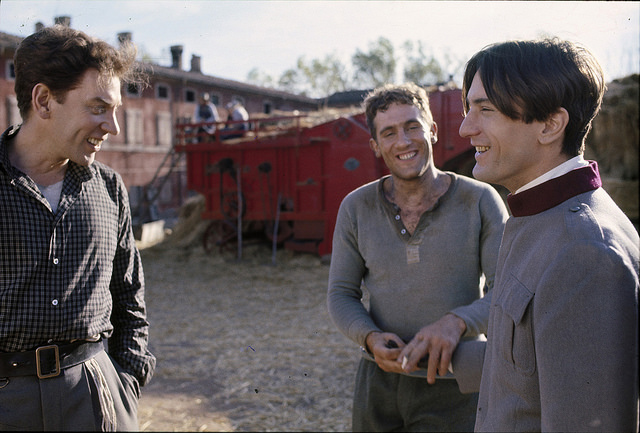 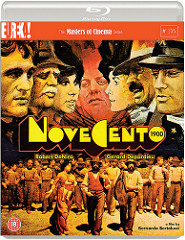 Bertolucci’s epic, combining the personal and political during the first 45 years of the 20th century, is set in the Italian province of Emilia-Romagna, were the featureless landscape and the ancient city of Parma are the background for the ongoing rivalry between families: the landowning Berlingheri and their peasant workers, the Dalcò. It is a melodrama featuring moments of extraordinary beauty – Oscar-winning cinematographer Vittorio Storaro’s sumptuous visuals glow with the resplendent luminosity of an Impressionist painting by Manet or Manet. But there is also outrageous cruelty and savage brutality and the performances, particularly by the female characters are often suffused by histrionic outbursts giving this the quality of a Greek tragedy, underpinned by Ennio Morricone’s often doom-laden orchestral score.

In 1901, the year that local composer Giuseppe Verdi died, two boys are born on the estate of the Berlingheri: Alfredo, who will inherit from his father Giovanni (R. Valli) and grandfather (Lancaster), and Olmo, son of Leo (Sterling Hayden) and Rosa Dalcò (Monti). After Alfredo’s grandfather commits suicide in the cowshed, his father dictates a false testament to the local priest, making sure that he inherits most of the estate, giving only an allowance to his brother Ottavio, a playboy, who travels around Italy. The two boys become friends, in spite of their different upbringing, Alfredo hiding from his father, whom he hates.

After Olmo (a softly-spoken Depardieu) returns from the Great War, he is greeted with open arms by Alfredo (a sultry de Niro), who wants to continue their friendship. But everything has changed and his father has since employed Attila (Sutherland), one of Mussolini’s fascists, as a foreman. Olmo warns Alfredo about the danger Attila represents, but Alfredo is only in hedonistic pleasures. After Mussolini takes power in 1922, strengthening Attila’s position, Olmo and Alfredo travel to Parma where they meet Ottavio (Bruhns), Alfredo’s uncle, and his beautiful companion Ada (a gracefully hypotic Dominique Sanda) and the two fall madly in love. Olmo’s partner and fellow socialist, the teacher Anita (Sandrelli), gives birth to their daughter Anita , but tragically dies in childbirth. Devastated by his friend’s loss, which seems to spur Alfredo on to marry Ada. At the magnificent wedding celebration, Attila and Regina (Betti), Alfredo’s cousin, feels jilted and madly jealous, as she hoped to be his bride. In a fit of angry displaced lust, Regina embraces Attila who, in a sexual rage, savagely murders a little boy and tries to pin the blame on Olmo. Alfredo does not stop the fascist mob trying to lynch Olmo, but a deranged young man, confessing wrongly to the murder, saves Olmo’s life. Ottavio, who had brought a white horse named ‘Cocaine’ as a wedding present for Ada, is disgusted and swears never to return to his brother’s house. Attila commits more and more gruesome murders, including a particularly horrendous one of the widow Pioppi (Alida Valli), to secure her home for himself and Regina. The relationship between Ada and Alfredo deteriorates and she finally leaves him, just before April 1945. Italy is liberated and Olmo, who has become a partisan, shoots Attila, celebrating their liberation from Alfredo, the ‘Padrone’, with his daughter Anita (Henkel) and the other peasants. Olmo declares the death of the ‘Master’, but keeps Alfredo alive, “so we all know forever that the Master is dead”. Alone with Olmo, Alfredo states very realistically, “the Master is very much alive.”

NOVECENTO is Bertolucci’s most ‘Viscontian’ film, premiered in the year of the older director’s death. Using a cast, many of whom had worked with Visconti (Alida Valli, Romolo Valli, Burt Lancaster), Bertolucci also explores one of Visconti’s central themes: the sexuality of fascism, here demonstrated in the murderous relationship between Attila and Regina. But in spite of history and politics, 1900 belongs to DoP, Vittorio Storaro (Strategia del Rago, Il Conformista). The childhood scenes of the first part are shot like summer: the colours are drenched, in dream nostalgia. Heavy clouds and torrential rain threaten the early stage of Fascism. The wedding is an icy winter picture, cold, harsh hues echo the deterioration of the relationships between Ada and Alfredo. Liberation brings spring’s acid primary tints; the lighting growing increasingly bright and celebratory. The mass scenes in Parma, during the socialist demonstration, are framed with impressive intricacy. The camera moves, swoops and glides in harmony with Ennio Morricone’s majestic, moving sound track, maintaining Novecento’s status as one of the great epics of film history. AS