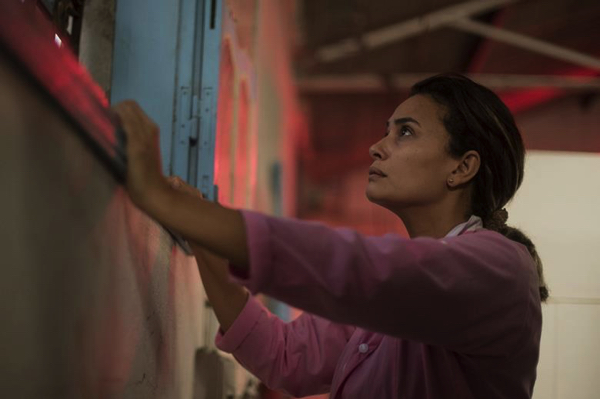 Tunisia’s Jasmine Revolution was a time of change for the nation’s working class. Filmmaker Hinde Boujemaa eyed the era with caution in her 2012 documentary It Was Better Tomorrow.

In her richly textured drama debut, Boujemaa brings the epoch to life in a flawed but fascinating story set in the crumbling backstreets of Tunis and led by a towering performance from Tunisian actress Hend Sabri.

Obviously corruption reigns and petty criminals abound in this impoverishing milieu enchanted by its once glamorous colonial buildings and now fraught with world-weary resilience amongst ordinary people just trying to make their way in life.

A macho male dominance is the order of the day along with the intransigence of Kafka-esque government institutions. Women stand very little chance of getting forward unless they too resort to their own brand of cunning. Noura’s dream prevails against the odds, but remains a dream, as suggestive in the title.

Hospital laundry worker Noura (Sabri) is in love with Lassad (Boumsaoudi) and the two share amorous embraces and fond glances indicative of the secrecy of their romance as Noura is seeking a divorce from Jamel (Abdelli), her jailed husband. She is a mother to three children, and her female lawyer reminds her that adultery, in Tunisia, carries a five-year prison sentence. Women beware women.

Jamel is intellectually challenged, to say the least. And when he is suddenly released from prison he starts to threaten Noura again. But Lassad offers little in emotional support. Noura is caught between a rock and a hard place: but most women will be familiar with this territory.

Sabri is brilliant as the central character. Her careworn face is a testament to suffering, yet she carries on in desperation, hoping against hope that love will find a way. Her son is just another misogynist in the making and her daughter looks on almost contemptuously as she vows not to make the same mistakes. An affecting debut that says: Plus ca change, plus c’est la meme chose. Mt