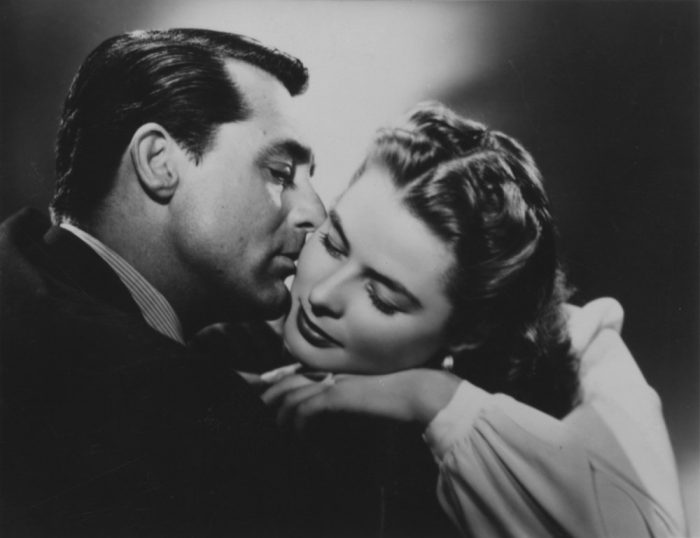 International espionage, romance and intrigue coalesce to make Notorious one of Hitchcock’s most unsettling thrillers. Cary Grant plays a perverse American agent who pushes the daughter of a tragic German spy into the bed of a Nazi ring leader. She goes along with the plan because she is in love with him. And he doubts her love because she goes along with his dreadful plan.

Devlin (Grant) is a debonair agent working for the US-government in post war 1946. The Nazis are still lurking in the toxic undergrowth and Devlin is instructing Bergman’s beautiful but emotionally broken Alicia Huberman how to  infiltrate their midst. Devlin falls for her, but their ‘honeymoon’ in Rio comes to an abrupt end when Nazi ring leader Alexander Sebastian (Rains) turns out be a willing victim of a honey trap. Sebastian is an old friend of Alicia’s father, who committed suicide after being convicted of espionage. Despite their great age difference – the foolish old man has already been rejected by Alicia during the war – he makes another bid for her affections and she acquiesces disillusioned by a string of love with dashing but unsuitable men (just like Eva-Maria Saint in North by Northwest). Devlin and Sebastian are lost souls – emotionally immature, they obey their super-egos: and Devlin is in awe of his older superiors, all father figures; whereas Sebastian is under the cosh of his dominating mother (Constantin), who is jealous of all the women he meets. Devlin and Sebastian are equally jealous of each other, and it nearly ruins Devlin’s plan. But after he finds out that the Nazis are amassing uranium, used for developing the atom bomb – Sebastian and his cruel mother become aware of Alicia’s double play. Fully aware that her son would fall victim to his fellow conspirators, if they found out about Alicia, Mrs. Sebastian schemes to kill Alicia slowly with cyanide – a plan that holds weight, Devlin believing – in his blinkered egotism, that Alicia is back on the bottle.

Although Hitchcock directed North by North West as a comedy: Gary Grant’s Thornhill is much more victim than perpetrator, and James Mason is a much cooler antagonist; Claude Rains is just caught in a double-bind between Alicia and his mother. While Eva-Maria Saint is blonde (and therefore much more dangerous), Bergman’s brunette garners more sympathy, Ted Tetzlaff camera caresses her, but shows Devlin as a cold and unkind boss. Notorious is about a perverted ménage-à-trois, North by North West is more a comedy-thriller with a happy-ending. But there is a wide gulf between Grant’s emotionally buttoned up Devlin and playboy Roger Thornhill, who enjoys the dangerous ride – up to a point.  But the Mac Guffins and enemy characters are exchangeable as always. The proof is in the (German) pudding: The American distributors did not want the German audiences to be reminded of their recent past (bad for business), and changed the Nazis into drug lords.

Amusingly, Hitchcock and his screenwriter Ben Hecht were investigated for years by the FBI simply because they did not believe that the duo actually made up the uranium story: Notorious was shot before Hiroshima and Nagasaki. In real life, the original producer David O. Selznick dumped the whole project for a mere 800 000 Dollar on RKO – who made a handsome profit with box-office receipts well over eight million; a profit of 237 Million $ in today’s money.

NOTORIOUS IS BACK ON 9 AUGUST 2019 AT BFI SOUTHBANK, WATERSHED BRISTOL, BELMONT ABERDEEN and cinemas nationwide.