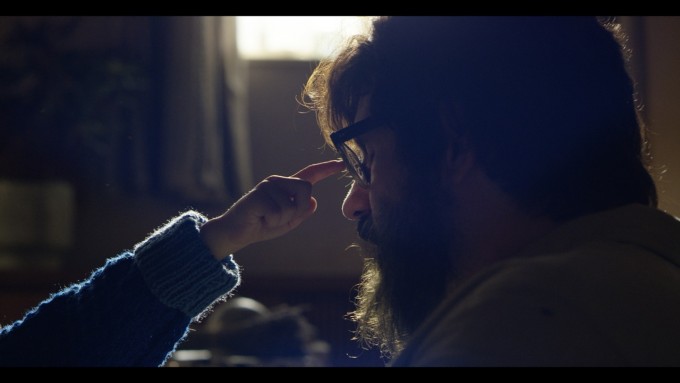 First time directors Peter Middleton and James Spinney have used the technique of Clio Barnard’s The Arbor for a moving portrait of the writer and theologian John Hull (1935-2015), who went blind in 1983, just before the birth of his son Thomas.

The filmmakers use the voices of John and Marilyn Hull, lip-synchronising part of the audiotapes John Hull recorded between 1983-1986 in trying to come to terms with his blindness. Dan Renton Skinner and Simone Kirby play the central roles.

John Hull tried to cope with his blindness in a professional way: he needed to understand his condition to be able to combat it – as an academic, his approach was well planned. But his cognitive approach turned out to be limited. When trying to excavate his inner world of blindness and ‘translate’ it into a sort of visual memory he soon found obstacles and limits. Whilst he was losing his purely visual memories increasingly, his retention of memories of photographs was much stronger. But as a man of faith, there was also a much wider perspective: John Hull admits freely, to “have been angry with God at times”.

Only when he accepted his blindness “as a gift from God”, a gift he never asked for, he started to make real progress in trying to make the best of this unwanted condition. The directors show his return home to Australia as a really grim episode where he got totally lost in the unknown vastness of the continent. His wife Marilyn was afraid “John would enter a world, where she could not follow him anymore.” Luckily, after his return to England, he adjusted more to his condition in the private and professional world as a lecturer, even though we hear his colleague’s voices questioning his chances of survival in the university.

Gerry Floyd’s conjures up a hazy, brownish and often diffuse visual terrain where rain plays a major role falling in slow motion on the couple’s’ house – all over the audio recorder. And John Hull feels the rain as a visual connection to his ‘old’, visual life. The photographs, shot with vintage lenses, which turn out to be so important for John, are photographed in macro shots, giving them a snapshot quality of years bygone. Needless to say, in a project concerning blindness the sound structure (created by Joakim Sandström) plays a major role. The sound ‘images’ reaching John Hull roll in like big waves, often feel threatening. Sound elements of the in-house rain are a small masterpiece in themselves.

The directors have developed a shorter version of the same title from 2014 into this feature length format, and it is very well worth it: aesthetically original, and sometimes daring in its intellectual approach, Notes on Blindness is an unique experiment. AS