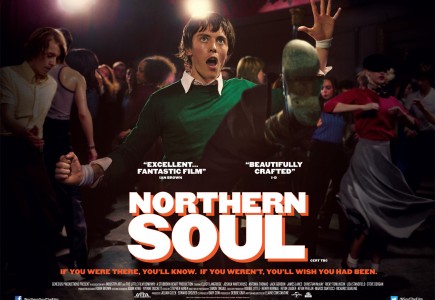 I remember the Seventies, and so does photographer turned director Elaine Constantine. Evoking her version of ‘up North, her memories are of rowdy disco nights with ‘yer mates, tentative snogs on the dance floor, of ‘fuckin’ this and fuckin’ that. A time of power cuts and miners’ strikes , of  T.S.O.P and Tamla Motown.

The narrative is linear and directionless, yet through it all emerges the essence of moody isolation and loneliness. A time when parents were angry and disciplinarian and kids felt fearful and frustrated. ‘Yer mum and dad’ weren’t you friends in those distant days, they’d sooner rap you on the back of head with a spoon and send you up to bed.

Elliot James Langridge is brilliantly cast as the lanky teenager John (he probably has acne but you can’t tell through the dim lighting), misunderstood by his parents and at logger heads with his teacher, Mr Banks, at the local Comp (although it’s unlikely he’d have given him the ‘f’ sign). Steve Coogan plays Mr Banks with swagger and savvy: he was there too and manages to rise above the teenage angst. When John meets Matt (Josh Whitehouse) down the ‘Youth Club’ they immediately bond and together discover a world of disco dancing, music gigs and girls – cue Antonia Thomas as ‘the nurse’. Although they all get on together superficially, there is little real camaraderie or chemistry between these underwritten characters, and this is where it all feels slightly unconvincing.

Where Northern Soul works best is in the club scenes where the old hits blare and the alchemy of the seventies gets a chance to percolate and produce a visceral kick that takes us straight back to our early teenage years. Originally intended as a musical documentary, it would certainly have worked better that way: Constantine certainly knows how to create a cult classic feel and mix the vibes that rocked those furtive pubescent years, wherever you were. MT