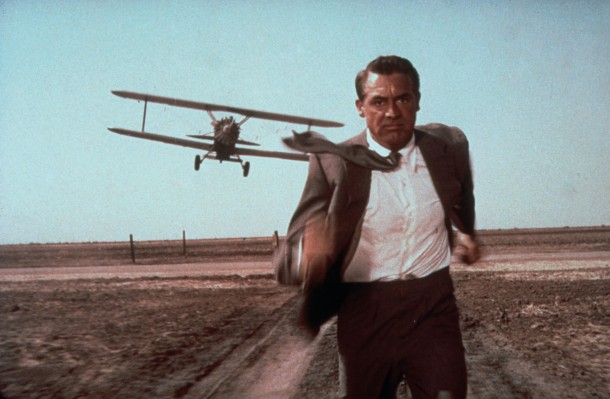 There’s a glorious irreverence to Alfred Hitchcock’s ‘wrong man roadie’ that makes it funny and thrilling despite the lengthy running time. This is largely due to Ernest Lehman’s sparklingly witty screenplay, and Cary Grant who displays the same suave insouciance as Roger Moore in his utter refusal to take anything seriously, despite sinister scenarios constantly threatening danger.

As dapper advertising executive Roger O’Thornhill, Grant is mistaken for an imagined spy, forcing him to dice with death at every turn; evading James Mason’s arch villain while channelling a universal ‘mummy’s darling’ turn – alongside the marvellous Jessie Royce Landis – until he falls for the dulcet charms of the much younger but highly resourceful Eva Marie Saint (he was 45, she only 27).

The Mount Rushmore settings are astonishing, not least for Robert Burks’ daredevil camerawork, while Hitchcock’s laudable re-creation of the Frank Lloyd Wright house on the precipice is an ingenious money-saving exercise that adds a twist of sophistication to the final denouement. This priceless classic picked up the Silver Shell at San Sebastian in the year of its release, but Ernest Lehman’s brilliant script went away unrewarded at the 1960 Oscars. MT