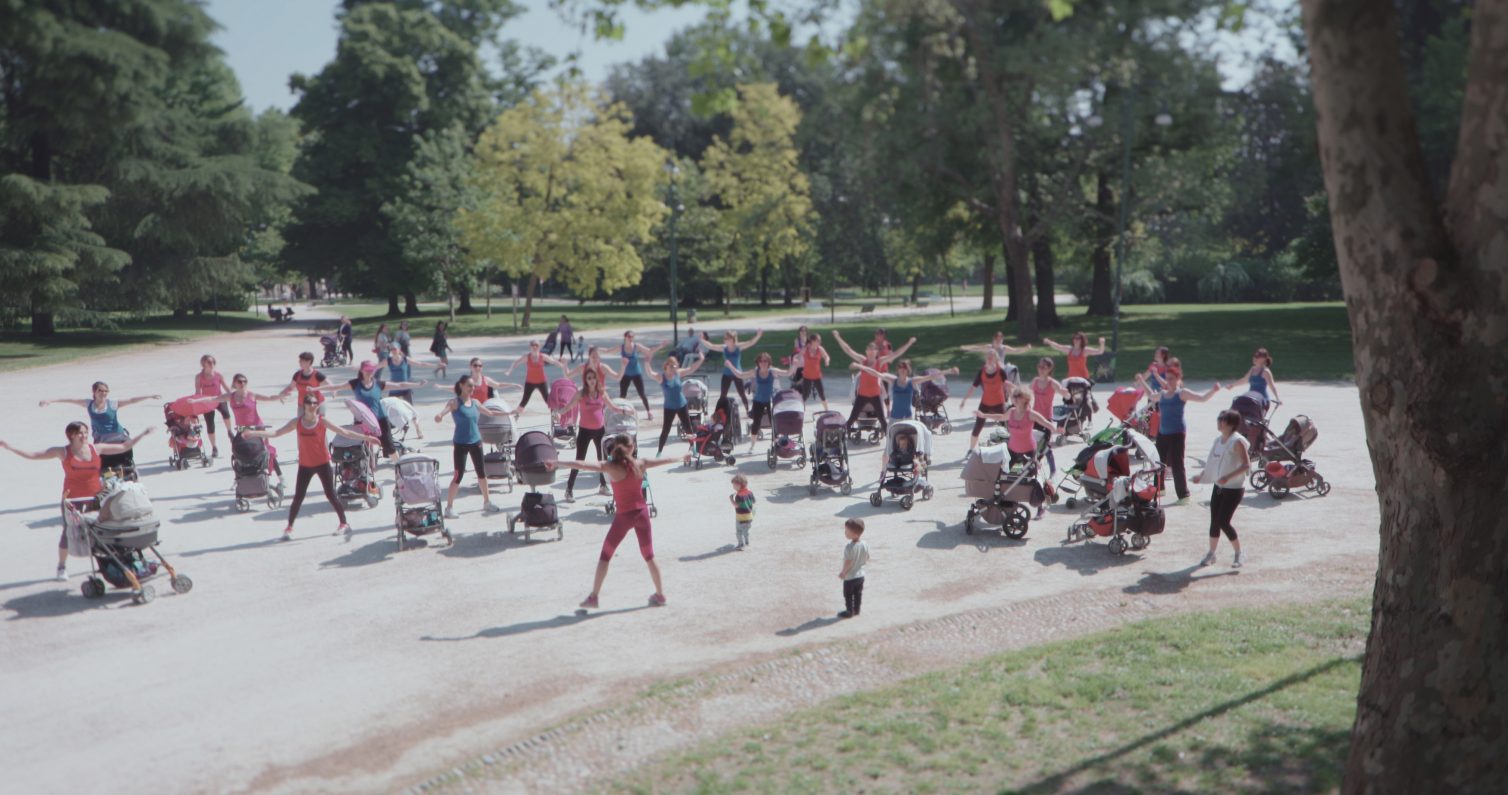 Tulli makes a real visual impact with her sophomore feature that examines gender specific behaviour through a series of vignettes picturing everyday scenes in Italian life. Normal asks the question: how is male and female determined? Is it built on childhood expectations, or does it arise out of a need to confirm to society’s rules.?

Certainly, obedience is expected from females from an early age onwards: a little girl has her ears pierced and earrings inserted, whilst the man performing the task calls her brave, because she does not cry. Her mother confirms expectations: “Now you have earrings like Mummy”. Images of underwater gymnastics for pregnant women and girls keeping fit, contrast with little boys copying the “Alpha Male” role model on their mini motor-cycles, and encouraged by instructors not to show any fear. On the toy production line, pink plastic is formed to make irons, sold with iron boards for the girls. Much later a woman lectures brides-to-be: “there will be a big change in their lives after marriage: they will have to do the cleaning, cooking and shopping themselves.” And a warning to mothers with children not to neglect their husbands, or themselves. “This must NEVER happen”, the stern lady makes it clear.

Meanwhile, little boys play war games in the arcades, and semi-army instructors tell teenage boys that “the gun is an extension of your body”. A young man tells a younger male how to interview females. “Always lead the conversation, alpha males bite back, particularly with women who are bitter, you have to be able to stand-up to a woman”. In a church, the message for young brides, which we’ve already heard from a woman earlier, is reinforced by a priest: “Virginia, take care of him and yourself every day”. At a CD signing, the artist Antony has his hands full with under-age girls, overly enthusiastic to snog him. And at the ‘Miss Modena’ competition om the beach, twenty-year olds have learned to give the right answers, whilst parading in mini-bikinis and high heels. We watch two very different weddings: Illiana in her early twenties has a raucous party, with the wedding cake in the shape of a penis, whilst enormous dildos are everywhere. In contrast, a middle age couple marries in a beautiful theatre in Ferrara, in a retro 1950s affair. And finally, young mothers, pushing their prams while doing gymnastics to stay fit – are all heeding the warning given to them, not to neglect themselves or their hubbies. Ever.

Normal keeps a cool distance from its subject, playing out as a candid collection of images. In an interview Tulli said: “I consider documentary to be a “performative act” between images and the reality that they are supposed to represent. My approach to non-fiction does not necessarily pursue objective truths, but instead subjective perspectives. In other words, for me, documentary forms can be used to provoke a critical interpretation of the reality they observe. In my film, I aim to present a disorientating portrait of accepted ideas of normality, and to generate critical and open-ended perspectives to counter heteronormative narratives.” So there. AS

ON RELEASE FROM FRIDAY 27 SEPTEMBER 2019