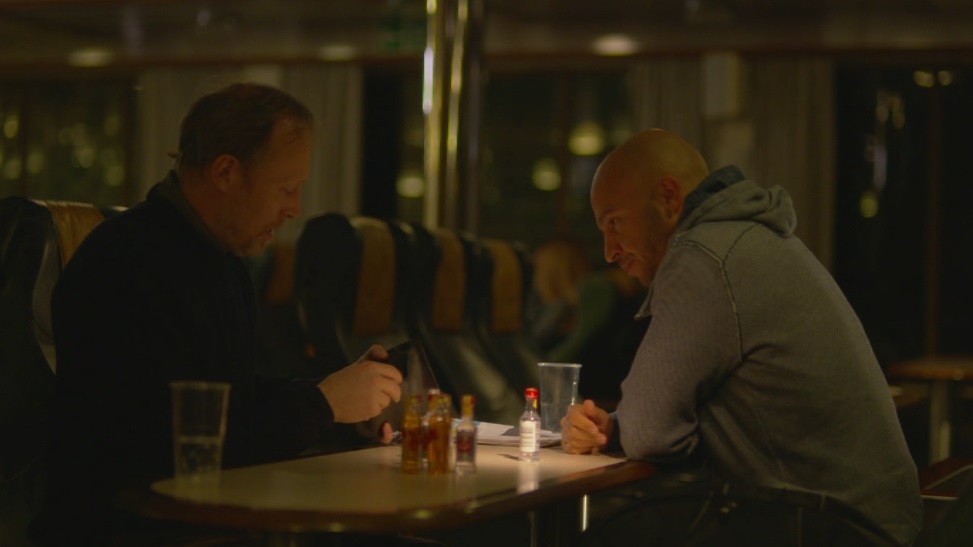 Nordic Factory is a Residency, Workshop and Short Film Concept which brings together young directors from the Nordic countries and their counterparts from all over the world. Their short films are documents of the collaboration between filmmaker from very different backgrounds.

THE GIRL AND THE DOG by Selma Vilhunen and Guillaume Mainquet. Mette, Lina and Anna-Sophie, three young teenagers, are on their way to a party. When they find dead dogs on the shore, their reactions are very different. Whilst two of them shrug off the incident, one of the girls tells her friends a long fairy tale about dogs, which her friends reject as childish. The monochrome images of the girls are very impressive, together with the grey beach landscape, they conjure up a poetic atmosphere. Stylish and expressionistic, as well as wonderfully acted. ***1/2

SUNDAYS by Kraesten Kusk and Natalia Garagiola. Every Sunday Anne picks up her old father from the care home, and takes him to the hothouse. But this Sunday is different: the tearful father confesses his guilt for the many beatings he gave her daughter “to make her a better person”. But Anna is not impressed, and her reaction startles her as much as her father. Poignant and very well observed, the ‘confession’ of the old man is shown for what it is: not a confirmation of his guilt, but just wailing self-pity. Perhaps a little harsh, but very realistic, SUNDAYS is nevertheless very stunning. Camera work excels in narrow spaces. ***1/2

LISTEN by Hamy Ramezan and Rungano Nyoni. In a Copenhagen police station a woman, wearing a burqa, is giving evidence of her husband’s continuous abuse. The interpreter, a young Muslim woman, on purpose miss-translates her complains to the police officers, as to keep the conflict hidden from the outside world; telling the woman that the imam will solve her solution. But the woman feels that she is miss-represented and gets angry, which in course causes the police officer to shout at her. Than her son contacts his father, telling his mother that he is old enough to defend her. A vey simple but far from simplistic short feature, which shows that a woman can be as treacherous as a man, when it comes to cover up individual crimes in the name of a religion. ***1/2

VOID by Milad Alami and Aygul Bakanova. On a ferry from Copenhagen to Bornholm, Daniel, a man in his early 50ies, starts a conversation with Amir, an attractive man in his 30ies. For a while we are guessing: is Daniel making a pass at Amir; but then the older man invites Amir to come with him into his cabin, were Daniel’s beautiful wife is waiting, ready to sleep with Amir. After hesitating, Amir finally succumbs, but finds out, that Daniel is living in the past. A very claustrophobic tale, told with many undertones: homophobic, racist and psychotic elements all intermingle. The acting is brilliant, and the camera travels around the two men, as if they were two animals in cage. Brilliant. ****
AS

LA ISLA by Katarzyn Klimkiewicz and Dominga Sotomayor. A medium length film telling the story of a family tragedy, set on a rural island. Jaime is the main character of his film, even though he is killed right at the beginning of the film in car accident – but this is only known to the audience. His family waits for him, first in a small cottage, later they all go out into the wilderness. Everybody is talking about him, tales and anecdotes, but somehow a certain change occurs in the atmosphere: it is, as if we are transported in a future, were nothing is the same any more. The cottage is falling apart, and the woods seem to take over. A melancholy study of transcendence and morbidity, LA ISLA is photographed with great imagination, nature being shown as something eternal, compared with the fleeting human existence, which gets frailer, the longer the film goes on. An engrossing, magical tour de force. ****