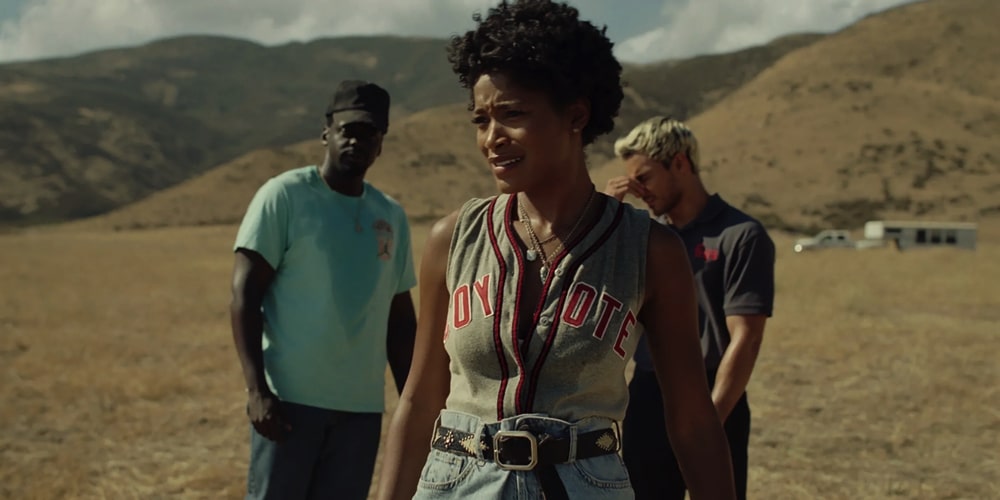 Best known for his much acclaimed feature debut Get Out, the mantle of ‘cult director’ is now sitting comfortably on Jordan Peele’s shoulders with this latest, rather confused epic, an accomplished B-movie that runs at over two hours. His backers, who budgeted a quarter of a billion dollars on his first two flics, are waiting with baited breath to see if Peele can score a hatrick with Nope – (yes, seems the answer could be there).

OJ (Kaluuya) and his sister Emerald (Palmer) live on a ranch in the Californian desert where they train horses for Hollywood productions, after their father Otis Sr (David) was killed in a freak accident when metallic UFOs rained down from the sky.

Divided into chapters named after the ranch’s horses, OJ and Em are alarmed by ‘phone and electricity black-outs, and spot some saucer-like apparitions in the night sky. Emerging from a cloud, the creatures resemble birds caught in the mist, but soon morph into a manta ray or a peculiar form of octopus. OJ treats them like animals and avoids starring at them, hoping to keep them at bay.

Meanwhile the siblings see a chance of making it big in Hollywood, and team up with a salesman (Perea) and cameraman Antlers Holst (Wincott) in the hope of capturing images of the entities with his advanced equipment.

In an unrelated plot-line, OJ sells some of the horses to Ricky ‘Jupe’ Park (Yeung), who runs a tacky Western show in the valley. Jupe has a weird backstory: he has been traumatised for life after playing a boy called Jupiter in the 1990 sitcom Gordy. In one of the episodes, a chimpanzee suddenly runs riot, killing all human cast members apart from Park.

At this point it’s worth mentioning that the Gordy massacre was telegraphed by a bible quote from ‘Nahum’ Chapter three, in which the citizens of Nineveh are threatened with punishment: “I will cast abominable filth upon you, make you vile and make you a spectacle”. Peele somehow connects the quote with the massacre, having the chimp pull off his garish birthday hat off and throws it to the ground. He certainly had enough.

This is certainly a Hollywood spectacle, but too far-fetched to give it much credit – it’s not even on par with the overrated Once upon a Time in Hollywood – without the historical underpinnings. There are gaps in the narrative, and some sort of structure would have helped. What makes it really worthwhile are DoP Hoyte van Hoytema’s brilliant 65 mm images (Ratio 1:2.39), unfortunately only available in Imax theatres.

Overall, NOPE is certainly a bit of fun, but the lack of depth – despite some allusions to history and politics – reduces its impact to just another fairground attraction. AS

ON RELEASE IN CINEMAS FROM FRIDAY 12 AUGUST 2022