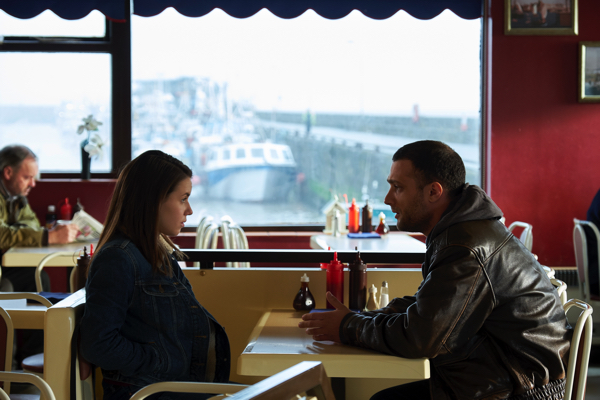 Nathalie Biancheri gets off to a great start as a filmmaker with this appealing indie drama that really benefits from Michal Dymek’s imaginative visuals, but the narrative’s ambitious underlying conflict is let down by an underworked script.

At the titles suggests the film plays out mostly at night in a small English coastal town where sixteen-year old Laurie (Coe) has recently arrived. Her emotional is far more difficult to handle than would have us know. An experienced athlete she is now running middle-distance at club level, but even professional life sees her as an outsider. Her mother Jean (Frost) seems uncomfortable too. Meanwhile she crosses paths with Pete (Cosmo) a 33-year old decorator in an unsatisfactory relationship with Jade (Rowan). Pete is a drifter who avoids any commitment, but falls into a laid back friendship with Laurie. But Laurie wants more, and when Pete re-coils – the long telegraphed -secret is out. When Pete moves to Rotterdam, Laurie is left to pick up the pieces, and her mother is unable to make her realise what has actually happened.

Biancheri and her co-writers rely on atmosphere and enigma to make up for their undeveloped script: skimming over characterisations to pack it all into into 86 minutes. We only get to know the bare essentials about the main trio, most is left unsaid. There is no real introduction to the characters, and whilst we very soon cotton on to the secret, there is no dramatic arc, because the building blocks are missing. Jean is particularly under-sketched, and there’s no explanation as to why she is so cold to her daughter. We are left with a great atmosphere, the nights are full of shimmering lights and the desolate amusement pier is captured with enticing allure. But this cannot make up for a script needing much more work. AS

IN CINEMAS AND CURZON WORLD FROM 18 SEPTEMBER 2020