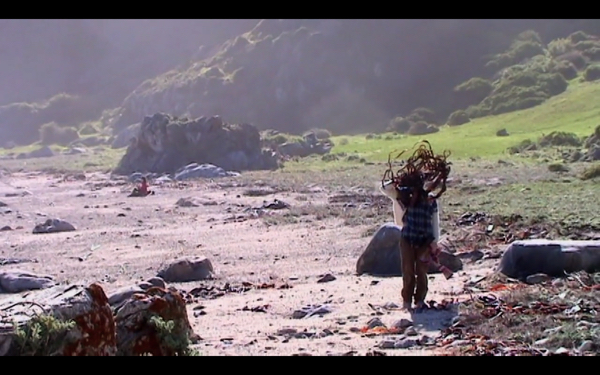 Pain, Rage and Acceptance: the various stages of rape. Chilean first-time director/co-writer and DoP Carolina Muscoso Briceño has dared to go where very few have gone before her: having been a rape victim almost a decade ago while studying at the Film School in Santiago, she has since made a film diary of her life still rocked to this day by the rape trauma. Intercut with her reflexions on the assault – and not only her own experience – Night Shot is a testament to gradual liberation.

“Rape victims are ashamed of what happened to them. The first thing that mobilised me was to break with that shameful legacy and to think of a way of exposing it to cross that barrier” says the director.

Everyday life go on, in various formats. Her experiences about the attack itself and the bureaucratic engendered are set mostly against a black background. On the beach near Santiago, Carolina became separated from her friends, and came across Gary. The two decided to go for something to eat nearby, but on the way he raped her. “Afterwards I did as he told me. I stayed motionless in the bushes. He said he would kill me if I followed him. I cleaned the blood off my face, picked up my ripped shirt and headed for the highway”.  The distress was further compounded by her father’s comments when he picked her up in his car: “a friend of mine got raped by her father. That’s much worse.”

Carolina went to a hospital, and was examined two hours after the rape. But the Catholic female doctor was against offering her a morning-after-pill, on the grounds of being against aborton “on principle”. What follows adds insult to injury and later Gary Raul Lopez Montero categorically refused any connection with Carolina. “I never knew anybody called Carolina. I met no one that night. I have a one-year-old daughter, I deny any involvement in this event” His brashness compared with Carolina’s answers still under the influence of the rape, made the DA drop the case.

Eight years later, Carolina makes another attempt to get justice, seeking advice from her lawyer friend Slvio who describes recourse as an uphill struggle for the victim, particularly where they refused to complete  hospital tests and seemed to lack conviction about their own role in the matter. Chile’s systemic structure of ‘justice’, in which the rape victim had to prove the guilt of the attacker, is common in most countries. Carolina’s first psychologist had told her “You are in the middle of an emergency landing”, and whilst she talked, Carolina imagined the different ways of falling.

Later Silvio has even worse news: The time limit for prosecution of rape is usually ten years, but since Gary was a minor at the time of the attack, the limit is just five years. Carolina eventually returns to the scene of the crime: “To be back feels like a big fire, this fire accompanies me, as well as the feeling that Gary is right here. That nine years later, he never has left this place”. She films and photographs the terrain, and is asked by a rider on horseback, why she is taking the photos. Her response is candid: “I am recording this place here, because something has happened here. Yes, here in Papudo. A long time ago, seven or eight years.” The rider asks: “Something good or bad”. Caroline’s answer is “good and bad”, before stating that she did not know her feelings are ambivalent. and: “I don’t know why I think I’ll find the wallet I lost that day”. Breathtakingly honest, Night Shot is an absolute masterpiece of form and context. AS