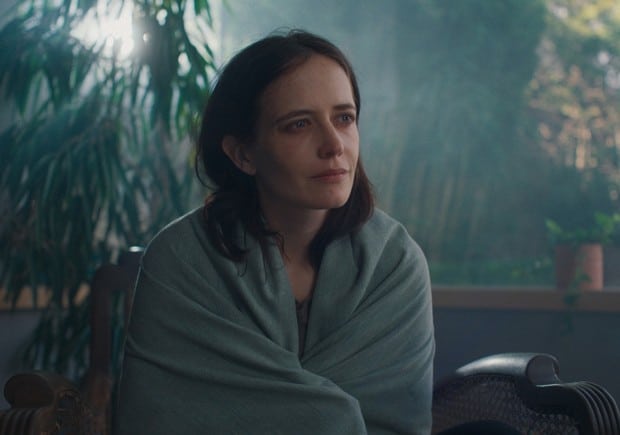 A tic is a metaphor for the exploitative fashion industry in this ingenious horror outing  starring Mark Strong and Eva Green. She plays a fashion designer suffering from a mysterious illness that frustrates her husband (Strong), the pragmatic voice of reason, and leaves their little daughter Bobs -a stunning Billie Gadsdon – totally distraught. Help arrives in the form of a Diana, a Filipino carer (Fonacier) who uses traditional healing to reveal a terrible truth in this latest riff on the nanny sub-genre.


Best known for his distinctive sophomore feature Vivarium Irish director Lorcan Finnegan plunders Filipino folklore and may have had his fellow countryman Sheridan Le Fanu’s The Evil Guest in mind for this incendiary thriller set in the contemporary and contentious world of children’s fashion. Once again, as in Vivarium, the focus is a married couple in crisis, this time a well-off professional couple: Chrissi (Green) and Felix (Strong) who live in a vast Victorian mansion in smart part of Dublin, but Bobs comes second to their high-flying careers.

The marriage is not without its flaws and the opening scene that sees the couple  arguing about who should pick Bobs up from school – as they climb into their top of the range cars in their gravelled driveway – will strike a familiar cord for parents who both work. Eva Green’s delicate – almost feral – beauty is just right for the role of Chrissi a highly-strung children’s designer whose health takes a turn for the worse after a difficult phone-call provokes a series of ghastly hallucinations featuring a dog festooned in tics.

Feeling generally under the weather Chrissi completely forgets hiring Diana (Fonacier), a spooky Filipino helper who arrives on the doorstep making herself immediately at home. Felix resents her intrusive way about the house calling her “a backward snake oil merchant”. Diana is indeed a mixed blessing – she cooks sumptuous meals and provides Chrissi with symptom relief – but always with the sinister caveat “for the time being”. A sinuous use of slow-mo and an exotic score ramps up our fears for the family, and flashbacks reveal Diana’s troubled past toiling in a Filipino sweatshop. Garret Shanley’s well-thought out script touches on all the right notes with convincing characters, a backstory that feels real and a satisfying plot resolution, and although the finale is a touch overwrought Nocebo is a slick and gripping watch. MT

ON RELEASE in early DECEMBER 2021