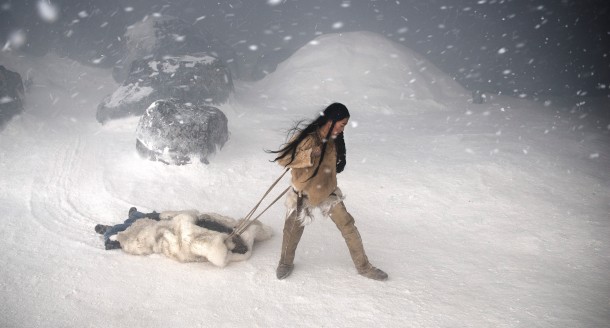 Catalan director Isabel Coixet’s Berlinale festival opener, a sweeping arctic epic that takes Juliette Binoche to the ends of the earth and back, is a drama that’s visually splendorous, if emotionally and intellectually perfunctory.

Binoche is Josephine, the wife of American explorer Robert Peary whose 1908-9 expedition to the North Pole gives the film its setting – the people involved, rather than events, inspire the film say its credits. Josephine arrives on Ellesmere Island, at the northern tip of Canada, to surprise her husband for his return from the Pole. She wants to be as close to him as she can be to his success at the top of the world, and sets out on a dangerous trip with huskies, Inuits and Gabriel Byrne’s crusty guide Bram to a remote outpost where her husband was last confirmed to be camped.

Arriving to find only eskimos and a frostbitten member of her husband’s party, Josephine sets up in a rickety hut, sticking her nose up at the native inuits who eat raw meat in their igloos outside. With winter approaching, the natives leave to head south, leaving Josephine and Rinko Kikuchi’s eskimo Allaka alone in the wilderness, the six-month long arctic night approaching. The scenery (actually northern Norway) is undeniably dramatic, helped by the authentic feel of Alain Bainée’s production design, this is a rare film that feels like it’s set at the edge of nowhere. Coixet’s direction in this department only lacked when – set in sub-zero temperatures – we never once saw Binoche’s breath in the cold air.

Binoche has neither the accent nor the pronunciation of the American she’s playing (she calls herself “Pee-air-ee”), but she’s a solid presence nonetheless, grounding Josephine as a bigot whose headstrong nature hides an insecurity of her roles of her family and her sex. But it’s Kikuchi, (nominated for an Oscar for Babel), who steals the show as Allaka, utterly believable as a woman only able to perform minimal verbal communication, but carrying deep emotional maturity.

Festival director Dieter Kosslick makes a significant move for women directors with Isabelle Coixet opening this year’s Berlinale – only three directors in the 19-film competition are women. Miguel Barros’s script is a broad feminist rewrite of arctic explorer myths of Shackleton and Scott: a particular moment when Josephine remarks that being “owned” by her husband gives her family life stability, proves cleverly ironic. Indeed, her stated desire to surprise her husband masks – perhaps even to herself – a wish to experience her own adventure in a way that would be inappropriate for a woman of her class from what she terms “civilised” society.

But if Coixet wanted audiences to take away a feminist perspective from the film, it’s almost undone by the fact that it is a man who comes to save Josephine from her frozen outpost. Indeed, Barros’s screenplay is frequently too self-regarding (lines like “every journey has its dangers – otherwise it wouldn’t be a journey” prompted guffaws) and a clunky voiceover takes away from the robustness of Coixet’s visuals in the Nordic mountains. It’s a shame that a film this highly promoted seems less strong when compared with other recent films of women in the wild. Only the scenery matches last year’s largely overlooked Tracks, led itself by a superb Mia Wasikowska performance. Another woman ‘on a mission’ in this year’s Berlinale is Gertrude Bell played by Nicole Kidman in Werner Herzog’s competition film QUEEN OF THE DESERT. Ed Frankl.

THE BERLINALE RUNS FROM 5-15 FEBRUARY.

FOR OUR FULL COVERAGE SEARCH UNDER BERLINALE 2015