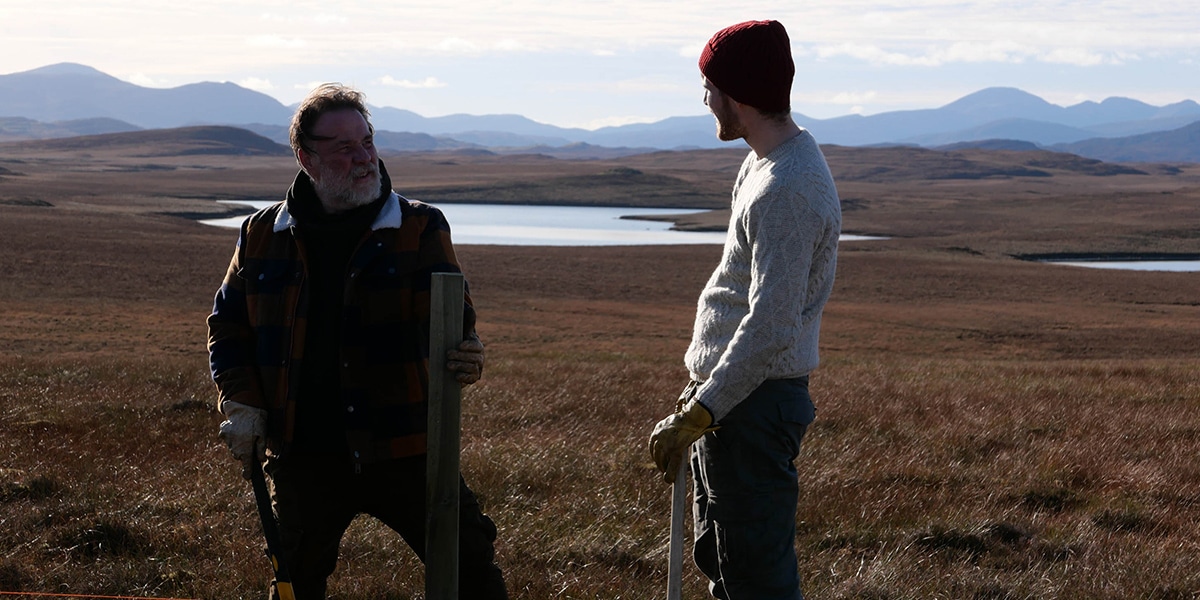 Memories define us connecting the present with the past. In his latest drama – a first in English – Belgian writer and director Bouli Lanners plays a man whose romantic history is rewritten when he suffers a stroke.

Atmospherically shot on the windswept Isle of Lewis in Scotland, this is a sober and reflective psychological drama made all the more dour by its subject matter and the morose-looking locals, although its hard to imagine that the thoughtful Phil (Lanners) is a Belgian farmhand – he behaves more like a sophisticated film director (!) with his raffish good looks, swept back hair and well-trimmed beard. And when his carer Millie arrives (Fairley) after a stroke leaves him with amnesia, she takes an instant liking to her vulnerable patient persuading him they were lovers before his illness. But there’s nothing wrong with Phil’s sex drive as he capitulates dutifully with romantic overtures which Millie instantly rejects causing him to be even more confused. Rapidly Millie realises she’s committed a faux pas and should really be struck off by the medical profession not only for lying, but also for abusing a mentally ill patient – particularly as Phil is now completely disarmed – and the two end up in bed. Millie continues to tease him with ‘memories’ of their past relationship and how it came about, and can now be rekindled. She’s clearly having a field day after a fallow patch in her love life on the barren island.

Despite its flawed premise Nobody Has to Know looks gorgeous, Lanners and Fairley making for convincing lovers as they wander along vast caster sugar beaches, storm clouds scudding by and merging into the distance. A religious subplot that sees the local vicar vehemently preaching the Christian gospel from a pulpit doesn’t quite work although clearly it represents the wagging finger of God. A dog called Nigel is the focus of another rather unsubstantial narrative strand in this watchable feature that explores identity, false memory and the nature of romantic desire. MT