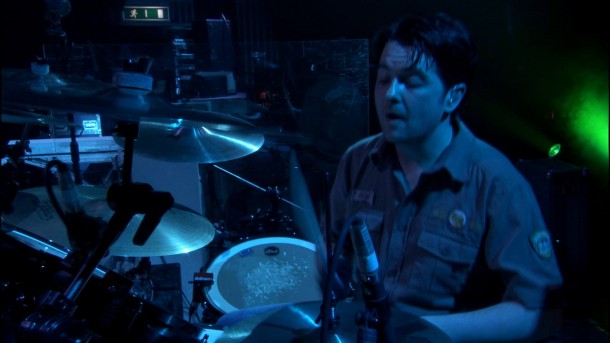 No Manifesto: A Film About the Manic Street Preachers (2015)

Better known for her work behind the scenes in Bowling for Columbine and Fahrenheit 11, Elizabeth Marcus’s directorial debut, 12 years in the making, is a biopic of this popular Welsh band, whose original intention was to sell 16 million copies of their first album before splitting up. Of course this never happened and here Marcus tells their story from their 2005 ‘Past-Present-Future’ tour right through to the present day workings of the band.

Travelling from the Band’s hometown in South Glamorgan, the action travels to Europe and the US, consisting of a collage of interviews with band members James Dean Bradfield, Nicky Wire and Sean Moore intercut with musical moments, live footage of rehearsals and impressions from enthusiastic fans. Those expecting a filmed concert such as we’ve seen recently with the biopics on Morrissey, Peter Gabriel and Duran, Duran, will be disappointed: the focus here is very much on the band members themselves as they share their thoughts, observations and hopes for the future and emphasis is put on the creative process with a ‘no holds barred’ approach. The band gave unprecedented access to Marcus and her crew and she offers up a fascinating and intimate insight that will appeal not only to fans but to anyone interested in popular music and the making of it. MT

No Manifesto will be released on 30 January with one night showings at Cardiff Chapter Cinema and Manchester Cornerhouse Cinema on January 30 and 31 respectively and at the Curzon cinemas London. A DVD release will follow in mid February 2015.