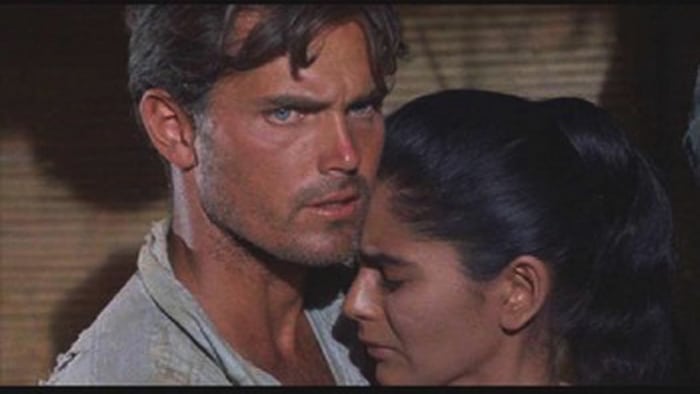 No Man is an Island (aka Island Escape) is based on the 1945 memoir ‘Robinson Crusoe, USN’ by George Ray Tweed (1902-1989), who evaded capture by the Japanese for more than two and a half years after the Japanese invasion of Guam in 1941.

Nearly two hours in length, this Universal release handsomely lensed in colour and scope by Carl Kayser and back in Hollywood edited by veteran cutter Basil Wrangell is considerably more ambitious than the other cheap war movies shot in the Philippines during the early Sixties; with Hollywood star Jeffrey Hunter again finding himself alone on an island dodging enemy bullets just nine years after finding himself in the same situation in the Boulting Brothers’ Singlehanded.

The title quoting John Donne – along with a lead actor who had just played Christ – had made me expect something preachier; but apart from a scene with a local priest there’s actually surprisingly little God talk (maybe there was more in Tweed’s original book). The situation was played for laughs in Heaven Know, Mr Allison! (from which footage reappears) and Father Goose; while the ending recalls Brigadoon. But here – despite one character treading barefoot on a scorpion and others bleeding to death, being decapitated and stripped down to a skeleton by crabs – the treatment is more like a soap opera, with a pet chicken cutely named ‘Admiral Halsey’ and a suitably romantic score by Restie Umali.

Although prominently billed second in the opening credits, Girl Friday Barbara Perez in fact gets a fraction of the screen time of ninth-billed Filipina comedienne Chichay (Mrs Nakamura) as a feisty Japanese-American saloon owner, to whose establishment the film keeps returning. Richard Chatten.