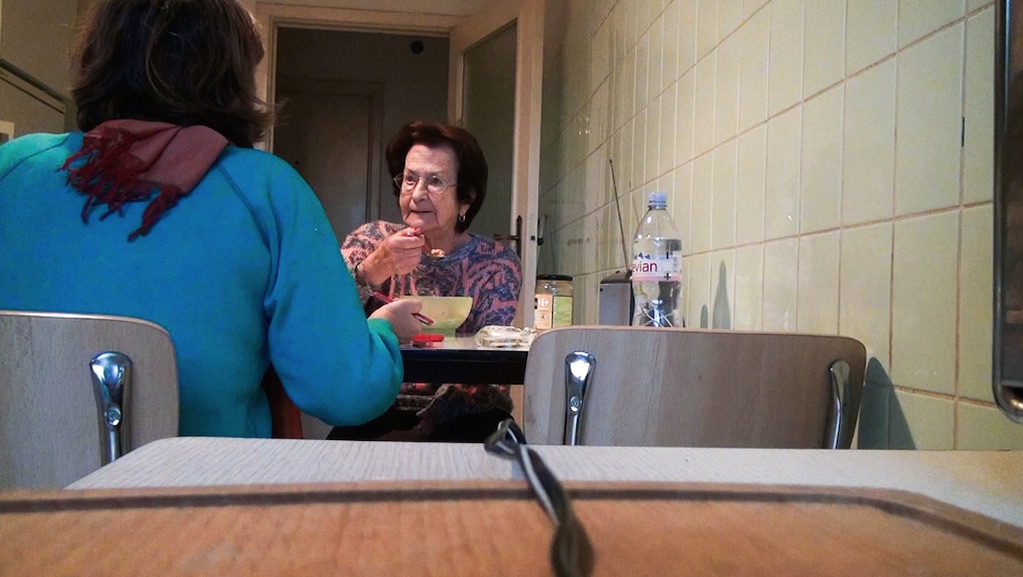 As its title suggests, NO HOME MOVIE is a chronicle of displacement. Chantal Akerman’s latest documentary is an immensely personal portrait of her mother, Natalia ‘Nelly’ Akerman, who died aged 86 in April last year. Born in Poland, like the filmmaker’s father, Nelly fled to Belgium in 1938, only to be sent to Auschwitz; surviving, she lived in Brussels thereafter. Shooting this diaristic dispatch over the course of several months, Akerman captures the mundane details of her mother’s existence, whether through Skype conversations or within her actual home, while incorporating footage of her own travels through a barren Israeli landscape.

It’s in this latter terrain that the film opens, with a lengthy take of a single tree being persistently battered by a ceaseless wind. The next shot is of the much greener and more tranquil grounds of a park, and the one after that is of the small garden that Nelly’s apartment overlooks. Akerman frames her mother’s home from unlikely angles, drawing attention to the fact that her film is a construction, and making a point, with half-obscured compositions, of its voyeuristic edge, as if to question the efficacy and even morality of such an intrusive concept.

Filming a Skype conversation that she conducts from Oklahoma, Akerman remarks, “I want to show there is no distance in the world.” Her mother is touched: “You always have such ideas.” When inside the apartment itself, the filmmaker leaves the camera running from a tabletop or a chair, evidently not fussed when it comes to polished compositions; her white-balances and exposure levels fluctuate like those in an amateur film. The title is a pun: in cinematic terms this is a dull film, not just in its unvarnished digital textures but also in its emphasis upon the domestic quotidian.

What kind of insights does Akerman glean, or expect to glean, from her mother’s life? Given her reluctance to talk of her time at Auschwitz, very little can be gathered of her imprisonment by the Nazis—which gives the more unremarkable anecdotes a doubly revelatory edge. During one scene in which mother and daughter eat lunch, one topic covered is whether or not the latter can cook well. These exchanges are the sum of their relationship. As the film progresses, less conversation takes place; Nelly’s declining health, and her worsening dementia, become evident.

Akerman mentioned in a recent interview that she probably wouldn’t have been able to make the film had she known it was to be a completed narrative from the off. Given the nature of its production, she could hardly have foreseen the way in which her mother’s physical and mental frailty grew—and so NO HOME MOVIE is frequently marred by an arbitrary structure and long sequences in which the filmmaker simply contemplates the seemingly empty apartment. Its poignant premise notwithstanding, this is a dreary film to sit through.

Given the filmmaker’s reputation and legacy (it’s some 40 years since she made her rigidly structured JEANNE DIELMAN in 1975), one can only assume that we’re to take the directorial credit here as a sign of inherent value. Experimentation and self-indulgence are two of art’s defining features, of course, but the success of the experiment depends at some point on the ‘self’ being indulged. It’s probable that making this film was a cathartic and challenging process for Akerman, and apparently she’s edited her final cut from 40 hours of footage. But when we’re asked to sit through a film-schoolishly juvenile and frankly tedious ‘scene’ in which she films her own shadow on a pond, we have to ask if the process is being valued at the expense of the product. MICHAEL PATTISON