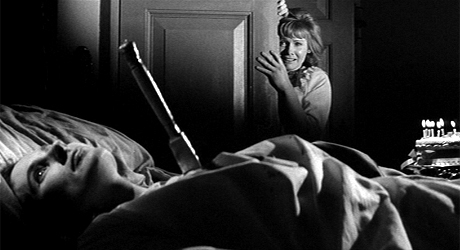 Although best known for their vividly coloured horror films, in their heyday Hammer Films’ regular scriptwriter Jimmy Sangster would also churn out one or two black & white imitations a year of Henri-Georges Clouzot’s Les Diaboliques (with storylines that somewhat anticipate the Italian ‘gialli’ of the seventies), starting with The Snorkel in 1958.

As one would expect from a film directed by the Oscar-winning cameraman who only three years earlier had shot The Innocents (1961), NIGHTMARE – shot in widescreen black & white by John Wilcox on atmospheric sets designed by the ever reliable Bernard Robinson – looks terrific, as can now be fully savoured on Blu-ray. (It is also one of a number of British thrillers such as 80,000 Suspects and Ricochet that happened to be in production during the winter of 1963 and gained enormously in visual impact from all that snow that lasted for a couple of months.) The visual splendour of NIGHTMARE comes at a price, however, since throughout the film events are staged with the camera rather than logic in mind. Shock effects that work in a movie with the assistance of split-second editing would be probably be impossible to actually accomplish in reality, and rely upon the victim responding EXACTLY as required! At times NIGHTMARE resembles an episode of Mission: Impossible, the way its elaborate ruses all function without a single hitch; and at one point even employs one of those impossibly realistic rubber masks that Martin Landau was always peeling off after we’d been watching another actor for the past twenty minutes!

No matter. Les Diaboliques cheated too, and part of the fun of watching this sort of film is knowing that the film is going to try to play fast and loose with us, and attempting to second guess them; as when the whole plot abruptly changes track about two thirds of the way through and it quickly becomes apparent that someone else is now being gaslit. The final leg for me recalled one of the lesser-known Bogarts, Curtis Bernhardt’s Conflict (1945), although that may be either just coincidence, or Sangster was simply copying another film I haven’t yet seen. Don Banks’ music is for the most part pretty effective, although they should have remembered that the gut-wrenching climax of Les Diaboliques was accomplished without any. But NIGHTMARE is overall a good cut above the gimmicky nonsense then being made across the Pond by William Castle.

The cast is good, and it’s satisfying to see the usually underused Moira Redmond in a showy part (there’s one electrifying shot of her in a black wig that renders her momentarily unrecognisable). Jennie Linden was a last minute replacement for Julie Christie (who had already been signed for the part but was then offered Billy Liar), and is probably a much more sympathetic victim than Christie would have been. As a bonus we finally get to see what the actress who played Miss Jessel actually looked like in close-up, with the return of Clyte Jessop from the earlier film; in white this time instead of black. RICHARD CHATTEN