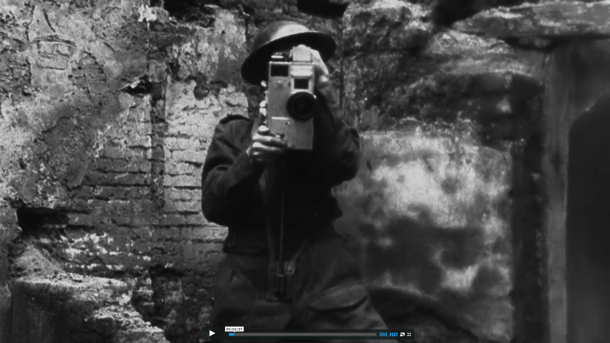 When the Allies liberated the concentration camps during the last phase of WWII, they literally did not believe their eyes: the horror they discovered was too much to take in; particularly and especially for the fighting soldiers. When Richard Dimbleby’s onsite report from the liberated camp at Bergen-Belsen was broadcasted in April 1945 on the radio to traumatic responses, Sidney Bernstein, Chief of the Film Section at the the Supreme HQ Allied Forces, commissioned British cameramen to film the liberation of the camps in the British Occupation Zone of Germany. Together with material from American and Soviet cameramen filming the liberation of camps in their zones (and Poland in the case of the Soviet liberators), it would form the basis for “German Concentration Camps Factual Service”, a first hand report on the atrocities of the Nazi regime – documenting not only the guilt of the camp personal, but the residents in the neighbourhood of the camps.

NIGHT WILL FALL is the story of how this unique documentary was never finished; never mind shown – apart from a one-off shortened version at the Berlinale in 1984 and a subsequent TV broadcast in the US. Excerpts from the original documentary material are harrowingly graphic and make extremely unpleasant viewing. Painful to watch are the mountains of corpses, starved to death, de-humanised, like the few survivors, who were surprised to be liberated “because we were meant to die”. The camp guards, surprisingly many women among them, had to help bury their victims, while remaining cool and detached as when they were in charge of the death machine.

Bernstein asked his friend Alfred Hitchcock to advise on the treatment. And he, like others before him, wanted to make sure that the documentary showed proof that the Germans would deny such a monstrous crime, which even today seems unthinkable. One way was to make the German residents of the nearby towns and villages visit the liberated camps, showing them the thousands of victims. Many of them had profited from the forced labour offered by of the camps, which was cheap and left the victims open to mistreatment on a wide scale. But this human workforce provided by the concentration wasn’t the only economic strategy of the Third Reich: All the belongings of the victims, amongst them hundreds of sacks containing human hair were found in Bergen Belsen along with toys belonging to the murdered children, dental equipment – nothing went to waste. As one commentator said: In twelve years the Germans dragged humankind 12 000 years back.

In the summer of 1945 the British government lost interest in the project to the piece together the original documentary film. There was a desultory memo talking about “the need for the Germans to wake up from their apathy and engage in the rebuilding of their country.” But the topic eventually drifted to the back-burner. Billy Wilder directed a short, 22 minute (German) version of the material, shown as Death Mills in 1945. Nearly seventy years after the project was shelved, the fully restored version of “German Concentration Camps Factual Survey” will be shown this autumn, thanks to the team of The Imperial War Museum. Sobering stuff indeed. AS