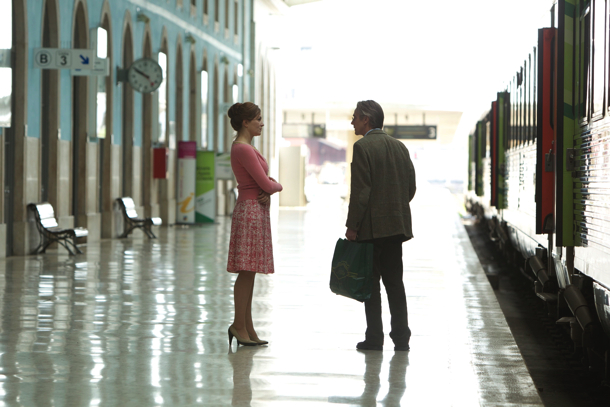 Train journeys have always been romantic and especially those at night: a sense of intrigue and expectancy as you hurtle through dark tunnels in the depths of the countryside. Here, Danish director Bille August has adapted Pascal Mercier’s novel NIGHT TRAIN TO LISBON  into an enticing art house treat with widescreen visuals and a starry cast.; or so it looks from the posters. So what could go wrong? Jeremy Irons puts his best foot forward as Raimund Gregorius, a buttoned-up boffin in search of himself in Bern. Having missed the boat on love, can he catch up by train?

On his way to work one day the jaded Gregorious meets a woman (Sarah Spale-Buhlmann) who obviously shares his ennui of life. Taking things a stage further, she is attempting suicide by jumping off a bridge, but eventually, due to his powers of persuasion, she agrees to follow him home. Before he can establish any facts, she disappears leaving her red coat and a book of musings by a certain Amadeu de Prado, who lived during Salazar’s dictatorship in seventies Portugal (Salazar, romantically, died falling off a deckchair). Inside, there’s a ticket for the night train to Lisbon..

Lost in the musings of de Prado (some of which is heard in voiceover), we’re all set for a train journey fraught with noirish strangers, cloaked villains and clanging bells. What we get is a tedious narrative that plods along occasionally rousing us from our slumbers as it hits another plothole in the tunnel of Gregorius’s own late-life crisis. Luckily the sympathetic figure of Marian (a compelling Marina Gedeck) shares his carriage and they bond instantly as the story unfolds.  Told mainly in flashback, it features resistance spies, love triangles and the talents of Charlotte Rampling, Tom Courtenay, Bruno Ganz and Christopher Lee, all doing their utmost to breathe life into this ambitious but rather stodgy affair that teases us with promises it never actually delivers. Unfortunately the train is soon derailed by the (self-confessed) bore Gregorius whom nobody can galvanise, least of all the nubile charms of Mélanie Laurent (as Estafania) or Jack Huston (as Amadeu himself). Do see it, if you’ve got an indolent afternoon with nothing to do, it might wile away a few hours but it won’t transport you to anywhere other than your cinema.  MT