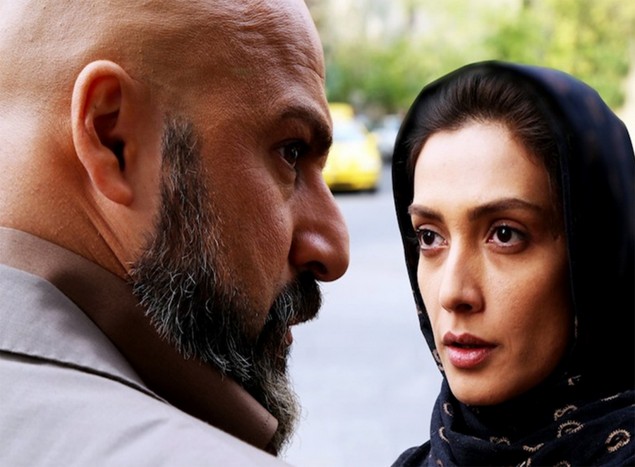 For middle-class Tehrani housewife Nahid (Leyla Zareh), nothing is what it seems. Asked by her GP—a personal friend—to pay a visit, Nahid’s first concern is understandably for her own health, but when it turns out that it’s her husband Farzad (Mohammad Reza Foroutan) for whom she should worry, her hitherto comfortable existence begins to unravel. Farzad, who works with Nahid’s friend’s own husband, has been acting strangely of late: despondent, adrift, and even suicidal. “I wish all of us would die,” he’s purported to have said, and has also invested in a gun with which to resolve his predicament. This is all news to Nahid, for whom there’s been scant trace of domestic discontentment—and it’s only the first of many mysteries to engulf her life. Discoveries of rat repellent, firearms, redundancy, loansharks and decapitated pet rabbits soon follow.

NIGHT SHIFT is the fifth feature-length work by Iranian filmmaker Niki Karimi. Best known in her homeland as the award-winning star of films such as SARA (1992), THE HIDDEN HALF (2000) and TWO WOMEN (2007), Karimi here confronts the pan-social, transglobal financial crisis through the local prism of a drama set in the petty bourgeois echelons of present-day Tehran. The film won awards for its script (co-written by Karimi with Ali Asghari) and direction at Iran’s Fajr Film Festival, prior to screening in competition at the 31st Warsaw Film Festival.

Karimi opens her film with a point-of-view shot of Farzad arriving home late one evening. From whose perspective we’re watching Farzad remains unclear, though off-screen voices imply gossipy voyeurism, as two unseen characters speculate about his recent behaviour. Though there’s no way for the anonymous spies to follow Farzad into his own apartment, Karimi continues the handheld aesthetic established in this first scene into subsequent sequences, instilling a kind of shorthand jittery tension upon domestic interiors that is offset by a piano and strings score that could be lifted verbatim from an old suspense film.

Indeed, NIGHT SHIFT’s increasingly melodramatic edge, which entails Nahid following her husband around Tehran like James Stewart does Kim Novak in VERTIGO, risks bloating initial mysteries into risible fluff. Karimi manages to keep a lid on things for the most part, though it’s difficult to say whether this is due to directorial restraint or the limitations of her performers. Zareh plays Nahid like a lost waif on the one hand and a resourceful detective on the other, though there are several instances where her acting is suspect. One such scene involves her hiding in her own wardrobe to elude suspicion from Farzad, as the latter hides a pellet-rifle atop the kitchen units; another sees her cornered by Rahim (Amir Aghaei), a cartoonishly bald-but-bearded loanshark who charms Zareh with threats and a smashed vase. In both scenes, Zareh plays to camera rather than the moment.

But NIGHT SHIFT’s real disappointment is how underworked Farzad’s characterisation is. No one can doubt Karimi and Asghari’s sincerity as scriptwriters here, but to sketch Nahid’s husband as an unflinchingly gloomy mope is both counterintuitive and too easy. The more rewarding challenge would have been to take his starting premise—that he’s lost his job as an accountant, and the implications this has on his personal pride and monetary situation—and to see him attempt to uphold the façade of happiness for the sake of loved ones despite an increasingly antagonistic system dragging him further into paucity.

But Foroutan plays Farzad like a man who not only doesn’t give a damn whether his obviously weird behaviour is noticed, but whose continued attractiveness for a trusting wife stretches the plausibility of the central drama. (“You can be so close to the dearest person in your life,” Nahid says with a twinkly lament, “yet so distant.”) Much of this might be down to Foroutan’s own shortcomings as an actor, but his performance isn’t helped by some harsh, ugly top- and side-lighting by cinematographer Alireza Baranzandeh, which illuminates the actor’s face in such a way as to expose the fact that he’s clearly caked in makeup, and makes his crocodile tears, in the one scene where Farzad finally opens up to Nahid, glisten rather distractingly indeed. MICHAEL PATTISON