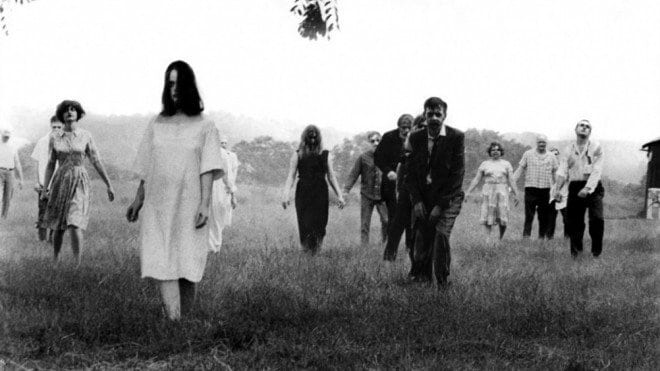 A cult film (actually similar in mood to Daphne du Maurier’s original short story ‘The Birds’) that still packs a punch over half a century later and richly deserves its cult reputation; despite having a lot to answer for, since it spawned so many gorier, inferior sequels. Needless to say, Night is one of the most successful independent movies ever made, grossing USD 30 million – over 263 times its budget, although none of the money – as usual – went to the people who actually made the film, due to a poor distribution deal and a copyright technicality waiving their rights to the proceeds.

It starts quietly, with the dialogue between two bickering siblings establishing from the outset the grimly black humour (like the rednecks who find an opportunity for sport in hunting ‘ghouls’; the word ‘zombie’ is never used).

Night of the Living Dead is actually extremely realistic for a horror film as every attempt made by the cast to escape fails. The handsome, level-headed hero is black (a fact never mentioned); a mixed blessing as every decision he makes is the wrong one and they’d actually have been better advised to have taken the advice of unattractive loudmouth Mr Cooper (played by co.producer Karl Hardman).

If one wanted to be really pretentious the film also contains it’s own Shakespearean ‘double time’ scheme, as it’s supposed to be charting the events of just one night yet the news bulletin from Washington – in which director Romero appears as a reporter – takes place in broad daylight.@Richard Chatten